How to Connect Your Wi-Fi GE Range to the Web 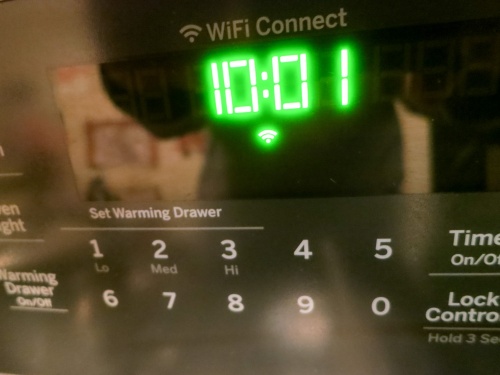 Behold, an oven that has Wi-Fi baked in! I must admit, I was excited and a tad scared to see the Wi-Fi icon pop onto my new GE range’s control pad. But it took a little work for my range to join the Internet of Things…

I must report I’ve obtained the power to burn down my house remotely using an app on my iPhone. Okay… calm down. That’s not really what this app is intended for… In fact, it’s an innocent app with the good intention to help me control my new GE oven when I’m not at home.

The idea is you can preheat your oven before you arrive home to get your dinner prep started. You can even start cooking that roast you popped in the oven before you leave for work.
(Example used for illustrative purposes only…I don’t know how well a raw holiday ‘Roast Beast’ would last in a cold oven.)

Observing from a Distance
So for those of you in the market for a new range, it’s a Wi-Fi enabled shiny
GE Profile 30” Convection Range. (Model PGB940ZEJ1SS)

And yes, my wife and I just bought one.
No… our decision was not significantly affected by its Wi-Fi capability.
(Secretly, I was pretty pumped.)

But the Wi-Fi value for me isn’t that I can cook dinner while I’m still at work.
(Though I know it theoretically sounds appealing)

What I really want is the ability to randomly check and make sure I didn’t accidentally leave the oven on when I’m not at home.
(The app doesn’t control the gas stovetop.)

Intentionally Disconnected from my Connected Oven
The GE app’s default mode is to simply monitor the status of the oven. You have to opt in to take over active control from your smartphone.

And that… I haven’t done…yet.

I feel a bit like Bruce Wayne in “The Dark Knight Rises.” He built a revolutionary energy generator, but was unwilling to turn it on, because he feared he couldn’t control its use.

And to quote another superhero franchise…
“With great power comes great responsibility.”
(Are we sensing a theme here?)

To be fair, the app has a safety setting, which automatically turns off the oven after it’s been cooking for six hours.
(Looks like the oven’s designers had some of my same concerns.)

So for now, I will observe my oven from afar.
And perhaps one day, I will summon the courage to control it from a distance as well…

How to Turn on the Wi-Fi Feature
You might be wondering how one sets up Wi-Fi on a GE oven.
(It doesn’t exactly operate like a computer.)

And as that’s the subject of this post, it’s probably time to get to the point!

I was a bit puzzled where to begin…
(The one-page instructions on “Connecting your Wi-Fi Connect Enabled Oven” wasn’t especially clear.)

GE calls the feature “Wi-Fi Connect”
and tells you to visit GEAppliances.com/connect to “download the appropriate app” on your smartphone.

On the website, you’re strangely greeted by advertising for more of GE’s Wi-Fi-enabled kitchen devices.
(Including refrigerators and dishwashers)

But in fact you’ve arrived at the right place. It’s the starting line to a process you need to go through if you want your range to join the Internet of Things. So after going through the exercise myself, here are the required steps to connect your oven:

At this point, I ran into a little trouble…

What?!
My stove is brand new. It already needs a firmware update?
Why yes…. Yes it does.

If this happens to you, you’ll next need to download another app that has the power to update your stove’s Wi-Fi module. 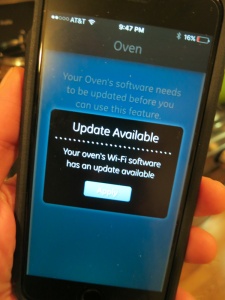 And I was on my way…

Adding to My Virtual Presence
The whole Wi-Fi setup took about half an hour. And though the firmware update wasn’t a huge roadblock, I’ve got to say the process wasn’t especially intuitive. You’ve really got to pay attention to the twists and turns…
(Though I must admit, the GE Brillion App’s light banter did take the edge off of my growing annoyance.)

So now I have yet another connected device to help me know that my home is healthy when my house is on its own:

And for now, my Wi-Fi connected GE range will simply reassure me wherever I am… that all is cool…