How to Choose the Best TV for Your Aging Parent 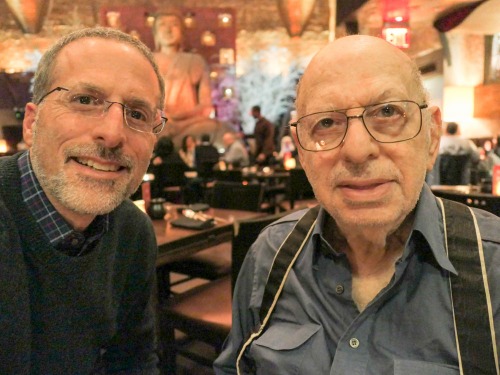 Taking my father out to dinner on his birthday was easy. Helping him buy a new TV was considerably harder. That’s because they don’t make TVs like they used to. And that’s exactly why you’ve got to pay close attention when selecting a replacement TV for a member of the Greatest Generation. Here are my shopping tips…

My 86-year-old father needed some help replacing his old analog bedroom TV, which had finally sputtered out years past the digital revolution. So my dad picked up his iPhone and asked me for a recommendation on a replacement. If you ever find yourself in a similar situation, here are the factors to consider…

Select the Right TV Size
My dad’s old TV was this tube-based hulking box with a massive body and 27” screen in the ‘classic’ 4×3 orientation. A slender 16×9 32” LED HDTV would be the likely replacement, though that feels small by today’s standards. The 40”-43” is the next jump up in size.

While that’s considered normal for a ‘small’ TV today (seriously), you’ve got to make sure it fits in the bedroom space. Plus, you’ll likely need to buy a new TV stand.

HDTV Legs Require More Surface Space
Well, somewhere over the last few years, TV manufacturers have seemingly switched from the center-stand mount design to upside-down V-shaped legs near each screen edge. This design change effectively increases the surface area required for any HDTV to sit on….

My father’s existing TV stand is only 29” wide. That would barely cut it for a 32” HDTV, let alone anything larger… 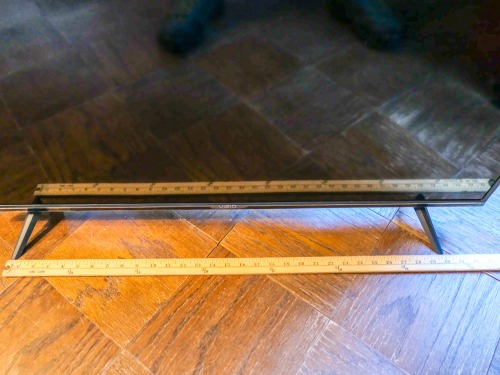 And even if you could balance your new HDTV onto an old stand, you’d have to worry about the risk of accidentally bumping the TV, causing one of its legs to slip off the stand… and then crash!

Yep, that could easily happen, now that HDTVs weigh so much less than their analog ancestors.

So, you’re probably going to have to also consider a new furniture solution…

Don’t Need to Go with 4K Picture Quality
I centered my research on a 40”-43” screen size for my dad. All I wanted was a straightforward, non-smart, non-4K, easy-to-use model that would quickly connect to my father’s cable box.

And let me simply say… you can’t buy that TV anymore.

Most TVs out there today come with a 4K resolution. But for a smaller screen size, you really don’t need all of those pixels. 1080p ‘full HD’ is just fine. That’s already a huge jump in quality compared to my dad’s analog dinosaur.

I’m sure any number of you would say you can see the 4K difference on a 43” screen.
But do you have the eyes of an 86-year-old?
(I’m just working the right solution for my particular user!)

If Possible, Avoid Smart TVs
Most TVs today are smart TVs with Wi-Fi and on-screen apps containing all of those marvelous and now-standard streaming options. But quite honestly, I didn’t really want to introduce my dad to the streaming world. He’s quite happy with how he used his old TV.

And more importantly, I don’t think he needs the added complexity, because that will just create more calls to… you guessed it… the IT Guy!

Not that I don’t enjoy talking with my dad on the phone. But there’s only so much I can remotely do to help him with his tech.

Yes, I do try to get into New York City to visit him every week. But he’s the kind of octogenarian who needs more immediate solutions to his tech challenges.
(We’ll just say he’s a little impatient.)

Would you like me to tell you about the time when my father’s iPhone’s ringer volume was turned down all of the way? …or the day my dad’s
iPhone wouldn’t charge anymore?
(Don’t get me started.)

I actually couldn’t find a non-smart TV made by a manufacturer I trusted.
(Spoiler alert: My dad ended up getting a smart TV after all!)

Look for Absurdly Low Prices
Okay.. so I zeroed in on the market for 40”-43” Full HD (1080) televisions, which were also inevitably ‘smart.’ And I was shocked at how inexpensive TVs have become in this ‘smaller’ size category.

But for what we’ve been talking about, the price point is less than half of that. Here are two great choices I found…

Both Samsung and Vizio have strong reputations for TVs although Samsung often sets the gold standard. Vizio is usually seen as a lower-cost alternative with good value.

But I especially liked the 40” Vizio for its smaller size. Most manufacturers are now only putting out 43” models in this range.
(Remember, I don’t want my dad’s new TV to overwhelm his bedroom.)

Keep It Simple
If you’d like, here are my consolidated shopping notes:

Ultimately, I think less is more when buying technology for the elderly. Keep it simple… Spending twice as much doesn’t necessarily mean a better experience.

My father loves his new television… His first words were, “It’s much brighter!”
(Mission accomplished.)

No, he hasn’t figured out there’s a ‘smart’ interface with it yet. But he will…

And yes, now there will be the inevitable training and trouble-shooting calls
in my future!
(Easy problems for #AdultChildofAgingParent)