Trapped by the Radio City Rockettes 

What do you do if the Rockettes magically appear in front of you outside of Radio City Music Hall? Be ready to capture the moment. Here’s what I saw…

I was hoofing it to work in midtown Manhattan when I almost walked into a man wearing a black shirt and headset. (He had that stagehand look.) He put up his hand and politely asked me to cross over to the opposite sidewalk.

I didn’t think twice as there are any number of reasons to temporarily close off a street in New York City. As I crossed, I realized that I was near Radio City Music Hall. Maybe I’d see a movie or TV show being shot.

Of course, I peered up the street to try to figure out what was going on. I spotted several photographers standing about. Suddenly a door swung open, and the Radio City Rockettes began pouring out.

Photo Opportunity in Front of Radio City Music Hall
In a bit of organized confusion, the dancers in full costume were quickly ushered across the street by security. Within seconds, all were congregating on the sidewalk fifty feet in front of me.

What was going on?

I slowed down as my path forward was blocked by the famous dancers. I couldn’t really reverse course as I found myself boxed in by the photographers and what appeared to be a dozen hand-picked members of the public. Perhaps they were contest winners to celebrate the opening of Radio City Music Hall’s Christmas Spectacular show?

Then, the Rockettes effortlessly morphed into three rows and took the perfect pose. Cameras began to click away. Of course, I inched forward and took out my own camera to join the moment.

Then, the sparkling group broke apart to take multiple selfies with their fans. Finally, the Rockettes began taking their own selfies using the same fan smartphones. 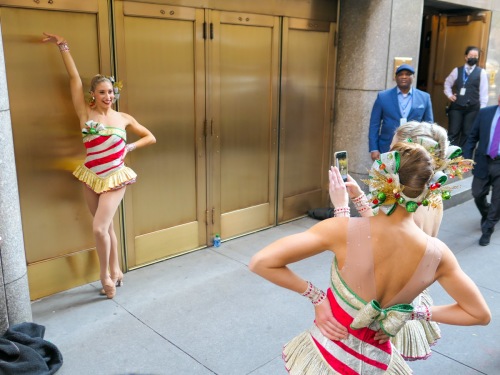 Three minutes later it was all over, and the Rockettes vanished through another door. I put my camera away and continued my trek to work.

As I walked, I tried to process my surreal experience. No, I wasn’t supposed to be a part of that little fantasy. But I had, in fact, been inadvertently directly to that exact spot. And nobody seemed to mind. It was definitely a New York moment.

Don’t Drop the Camera!
So I didn’t take my pictures with my iPhone. Instead, I used my compact Panasonic Lumix LX-10, which I happened to have in my jacket pocket.

Not that I couldn’t have relied on my iPhone. But using my Lumix’s better grip and wrist strap, allowed me to safely stretch my arm high to frame some of my shots. (You don’t want to drop your delicate smartphone onto a New York City sidewalk no matter what kind of case is protecting it!)

Always be Ready for Street Photography
And why did I conveniently have my Lumix in my side pocket? Recently, I’ve been packing it with the plan of walking a tad slower during my commute so I can pay more attention to my surroundings. And if I spotted a picture-worthy moment, I’d be ready.

I love it when a plan comes together.

You never know what you’re going to see on the streets of New York.