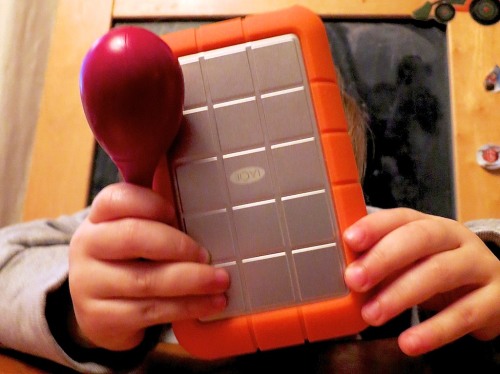 Even if you have faith your hard drives can withstand the forces of fate, they’ll eventually weaken under the load of all those home videos you’re shooting.

I was at Staples recently, trying to handle a work-related emergency that required the immediate acquisition of a 2 terabyte external hard drive for a video project.

It was such a crisis, I didn’t have the time to schlep to the nearest Apple Store to pick up one of my preferred brands of hard drives. (more on that later)

But I figured the Easy Button shouldn’t be too hard to find.

I just needed a drive to transport some extremely large video files.
The drive wasn’t destined for workhorse service in an edit suite.
So I figured most any brand would probably do.

I mean, most new drives should work for at least a few days, right?
(Heck, they should last for a few years!)
This drive needed to live for twenty-four hours.

After that, it could self-destruct into a gelatinous mass of green ooze.
(It would still be forever known as the drive that saved my project.)

But I couldn’t bring myself to simply grab any drive off the shelf and join the charge of the Light Brigade.

I’ve got the mutant ‘shopping-for-tech’ gene hard-wired into my ‘techdentity.’
So it forced me to review my options in a quick but orderly attempt to identify the best drive available.

Penny Wise and Pound Foolish
I stared through the locked panes of impenetrable plexiglass, guarding the legions of hard drive boxes. I struggled to read the fine print.
(Like when you’re shopping for jewelry… The price tag always frustratingly turned just out of view!)

Then I noticed a guy in his 30’s standing next to me, staring at the same pane of plexi as he gripped a frayed sales circular.

We both spent a few minutes in silent solidarity, confused by the choices in front of us.

He finally picked out a box after Cerberus came by and opened the locked fortress. My fellow nerd held up his new box and stared at it.
I looked at him. He looked at me.

“What do you think?” he asked.

“Why such a small drive?” I responded.

“You can get a drive four times the size for just a little bit more.”

“I don’t need much. I’ve just got some photos to store.
And this one is on sale. What do you think?”

I didn’t know what to say, because explaining the facts usually takes more than a few minutes when it comes to At Home with Tech.
(inside joke)

He continued his confessional.
“My wife sent me out to get a hard drive, and I’m not sure which one to buy.”

I really felt for the fellow.
He was the family IT guy, and he didn’t even know it.

I smiled and nodded.
“You’ll be fine.”
There was nothing more to do.

He returned the smile, unconsciously recognizing our ‘IT Guy Solidarity’ and walked away.

Like Greek Mythology, All Stories Don’t Have Happy Endings
I hope my friend had good luck with his tiny drive when he got home.
However, I suspect it will eventually turn into a Medusa when it runs out of storage space.
No one ever has just a ‘few’ photos to back up.
(If that were all he really had to worry about, a $9.99 thumb drive would have done very nicely.)

As for me, I made my selection between two lesser known drive manufacturers used by Apple geeks, and then sped off on my rescue mission.

I delivered my precious package in time, but there was one little problem.
Hades must have tried it out first and then returned it.

My shining drive was dead right out of the box.
When plugged in, it was just a hockey puck.
(seriously)

Fortunately, my project ended up surviving this little setback.
It’s a long story, but fate simply gave me a pass that day.
(deus ex machina)

And Staples provided a refund on the hockey puck too.
(I declined the replacement offer.)

One Way or Another, You Will Pay
So what can we learn from these two connected tales of tech woe?
Well, I think we can glean two truths:

Video – There’s the Rub
My friend doesn’t know it yet, but he really should have supersized his purchase.
Sure, his 500 GB drive will handle lots of photos, but I predict there will also be some home videos to back up in his future.

Come on…
Everyone takes digital home videos these days.
Smartphones. Digital cameras. Camcorders… they’re everywhere!
I bet one day soon you’ll find a device that can record video in the bottom of a cereal box!!

Even if you only occasionally take videos on your iPhone or Samsung Galaxy, it’s just a matter of time till you’ll need a big hard drive to store them on.

Whenever I shoot some video, I usually shoot several clips ranging from one to three minutes each.
For example:

A sub-terabyte external hard drive just isn’t going to cut it for long.
You do the math.

“Wait a minute!” you say.
“My computer’s hard drive has plenty of memory to handle my videos.
Why all the fuss?”

Yes, but you’ve got to back them up somewhere, right?
(You do back up your computer’s hard drive. Hmmm?)

No matter how big your external hard drive is right now, you’re always going to need a larger one.

G-Technology or LaCie?
Even though we’re all locked in an inevitable hard drive upgrade cycle, it still makes sense to buy the best drive you can afford.

You don’t want to wake up one day, and all your precious home videos and photos are suddenly trapped in a hockey puck.

There’s no shortage of opinion out there on the best hard drives to buy.
For me, the main criteria for a good hard drive is reliability.

I started buying LaCie hard drives years ago.
I never had one crash on me.
(though one did start acting kind of funky)
I still happily use my portable LaCie “Rugged” drive with its telltale orange rubber bumper.

But enough video editors I’ve spoken with over the years have shared their LaCie horror stories. Plus the web is filled with angry LaCie owners.

That said, since every hard drive has its own unknown expiration date, you’ll find ugly stories about every drive manufacturer.

Then, I heard a lot of good press on a company called
G-Technology.
Their G-Tech drives are more expensive than LaCie’s, but the consensus
(if one can call it that) is they’re better.
So I made the switch.

Since then I’ve been a G-Tech man.
And I’ve been very happy.

I own a 6 TB G-DRIVE for my Time Machine backups and a G-RAID to store and edit all my home video files.

RAID Drives
Though every hard drive will eventually die on you one day, there’s one general exception.

They’re called RAID drives, which stands for ‘redundant array of independent disks.’
A RAID is essentially one big hard drive made up of linked, smaller disks.

If one of the hard drives in your RAID fails, the others have enough redundant data to maintain the integrity of all your files.
The downside to this solution is it shrinks the effective size of your hard drive with all that duplicated data.

There are many complicated ways a RAID drive can be formatted or ‘striped.’

The one essential rule to remember is RAID 0 doesn’t provide any back up security.
It does give your drive a big performance boost for video editing, but that’s not what we’re looking for right now.

You’ll need at least a RAID 1.
For more detail on RAID technology, this is a good article from Gizmodo.

Be forewarned…
RAID drives are a lot more expensive.
(Are you sitting down?)

The G-Technology 8 TB G-RAID with Thunderbolt 3 (with two drives)
goes for $599 on Amazon.

But if you could afford it, wouldn’t you pay more for a little peace of mind on the home tech front?

You Don’t Always Need a Bigger Piggy Bank
Of course not everyone will jump at the opportunity to drop six hundred clams on their home video projects.
You could easily go to Staples and buy a basic 8 TB drive for only $199.99.
But it’s an apples and oranges comparison.

The good news is the ongoing forward march of technology makes heartier hard drives cheaper by the day.

Plus, you may never need a RAID.
I needed to raid my piggy bank to buy a RAID, specifically because I wanted it to safely house my ever-bulging collection of HD home video clips.
They would otherwise max out my iMac’s hard drive.

If you’re able to simply store all your video files on your computer’s internal drive and only need a Time Machine back-up drive,
I recommend G-Technology’s ‘G-DRIVE.”

Now, that’s not so painful, is it?

Release the Kraken!
These days, there are any number of ways to summon the wrath of the tech titans.
A hockey puck could be the least of your problems.

If Perseus were around today, I bet he’d have a large G-Tech drive in his bag of tricks.