One Father’s Journey to Introduce “Star Wars” to his Son 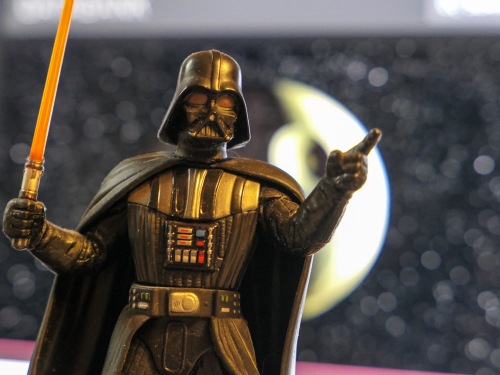 If you’re a parent trying to figure out when’s the right time to expose your kids to the Dark Side of the Force, here’s my story as a parent and a “Star Wars” fan…

I’ve been waiting for this moment since the day my son was born. And please grant me this nerdy pleasure… My boy and I watched “Star Wars” together this past weekend in our family room.

He’s nine years old, and I know that many younger kids have watched all of the movies already, including the newer ones. And it’s not like I haven’t tried a couple of times before. In fact, I did technically screen some of “A New Hope” with him two years back. But he didn’t really like it.

Thank you, Harry Potter
He simply wasn’t ready. I think it’s because of the plot’s suspense and the Dolby-infused mayhem of blasters and light sabers. But mostly, it was the suspense. At the time, he was still enjoying Lego movies and “Ice Age” flicks.

But then, he caught the Harry Potter reading bug, and he tore through all of the books. And when he found out there were movies, of course he wanted to watch them. To date, we’ve gotten through the first five. And as much as there was plenty of intensity and suspense in those flicks, he already knew the stories. So, I think it was a wonderful way to comfortably ease him into consuming more serious storytelling. And I hoped it would be a bridge…

If at First You Don’t Succeed…
We sometimes have ‘family movie night’ at home, and I’ve recently begun suggesting “Star Wars” again, but he still wasn’t interested.

Then, last Saturday, it was my turn to choose a movie. (We rotate between the three of us.) Without any big set up, my son and I sat down on the couch. Usually, he wants to know what we’re going to watch, but not this time…

I powered up our Apple TV and scrolled down to the “Star Wars” thumbnail grouping.
(I’ve previously purchase the first six movies.)

He saw what I was doing, and he didn’t object. I kept going…

I hovered over “The Empire Strikes Back,” since we technically had already seen “A New Hope.” But my boy helpfully suggested that we play “A New Hope” since he barely remembered it.
(Whoa! Was this actually happening?)

What’s the Right Order?
Before I could tap ‘play,’ he noticed “A New Hope” wasn’t listed first, and then we got into the discussion of order…

I explained the whole two/one/three trilogy thing, and I could tell he was trying to understand why anyone would make a series of movies out of order. After thinking about it a bit more, he asked if we could simply start at the beginning with Episode 1.

I looked at him, and knew I that needed to make the call. I explained that I wanted him to watch the movies in the order that I had watched them as I was growing up. He took another beat and happily said, “Okay.”

We were on!
Cue the John Williams soundtrack…

The Question of Luke’s Father
What can I say… It was glorious. The two of us were finally watching and enjoying “Star Wars” together.
(My wife took a rain check on this particular screening.)

He really liked “A New Hope.” When it was over, he proclaimed that R2-D2 was his favorite character, because he was such a “cool robot.” (He had laughed at all of the little droid’s antics.) Then he quickly chose Obi-Wan Kenobi as his second favorite character. (It’s hard to ignore the amazing Alec Guinness.)

Then my boy said, “I bet Luke’s father is in the first three movies.”
He waited for my response.

Wow. I and many others had a lukewarm response to Episodes 1-3. But this pop-up focus group of one fourth grader immediately identified the strong desire to know the back story.

I smiled at my son.
“Is Luke’s father in the first three movies?
Yes, I think it’s a good bet that he is…”
(Cue the famous breathing sound effect.)

Parenting 101
It’s a long journey to “The Rise of Skywalker,” and as much as I’d like to take my boy to watch it on the big screen, he likely won’t be through the other movies yet. Plus, there’s a reason why this new trilogy is rated PG-13. The films are intense.

My wife has sometimes had to remind me that as a parent, I should observe the cues from our son to better understand when he’s ready to experience something new.

What’s the right age to start watching “Star Wars?”
Of course there’s no one-size-fits-all answer. As a parent, you’re supposed to make that call.

Should I have been pushing “Star Wars” for the past two years? Probably not. As a father, I’m admittedly sometimes still just a Padawan.
(At some level, aren’t we all students in the art of parenting?)

But now that he’s ready for a galaxy far, far away… I can’t hide my own
child-like glee.

The Force is with him.