Why Face Masks and AirPods can Make a Dangerous Pair  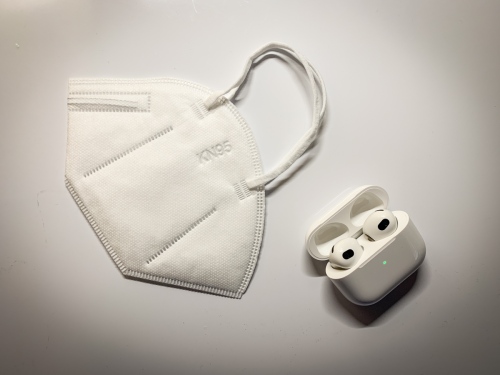 If you’ve returned to your commute, you may need to consider how to properly arrange what you wear on your face and ears. Here’s why.

I’ve been enjoying my new AirPods 3 on my Metro North commute to Grand Central Terminal.

Not only am I a new AirPods user, but I’m also a new subscriber to Apple Music. (I took advantage of the six-month free trial membership offer I received as part of my AirPods purchase.)

So as you might imagine, my commute has become a more immersive experience of motion with music.

Walking with AirPods
That said, I’ve been a real baby about walking through the streets of New York City while wearing my AirPods. Why? I’m worried that one of my wireless wonders will drop out as I weave my way to work.

I know that’s silly, especially as I pass hundreds of people every day happily sporting their own AirPods.

If you’re wondering, I deliberately did not buy the more securely-fitting AirPods Pro, because I didn’t like the way they felt when I tried on a test pair at the Apple Store a couple years back.

But I’ve been studying the faces I pass, and plenty are not wearing the Pro model.

And I don’t believe there’s an epidemic of people dropping their AirPods on New York sidewalks and lunging about to rescue them.

So, after a couple of weeks on training wheels, I decided it was finally time to do a proper test drive.

Losing my Left AirPod
Of course walking with them in my ears was fine. Until it wasn’t. That’s because there’s one variable that AirPods were not designed to handle.

When I arrived to work and walked out of the elevator, I simultaneously reached up to remove my mask. It’s become something of an automatic gesture that I don’t think about anymore. Plus, I was rushing.

And that’s a mistake.

An AirPod didn’t just drop out. I did better than that. I literally launched one out of my left ear.

My mask’s cord caught the AirPod and transformed into a rubber band catapult.

My AirPod became a little projectile and ricocheted like a pinball onto the marble floor of the elevator hallway. The sound was excruciating.

I lunged after my AirPod as another elevator door was about to open… possibly releasing a crowd of crushing feet. (I had a flashback to that “Indiana Jones and the Temple of Doom” scene where the little antidote bottle was kicked about the dance floor.)

I finally caught up with my AirPod and jammed it back in my ear. (No, I didn’t consider the hygienic consequences.)

I stood up and looked around. The elevator hallway was still vacant.

Nothing to see here.

And then I walked away.

Damaging my AirPod
Of course I tested my naughty AirPod when I arrived at my desk. Thankfully, it worked fine.

But the next morning on my commute, it was completely silent. Yes, it had juice. Was it dead?

In a bit of panic, I researched the problem on my iPhone, and Apple suggested I reconnect my AirPods and charging case to my iPhone. So, I quickly did that Bluetooth reset.

…and my left AirPod came back to life.

So did I damage my left AirPod? It can’t be a coincidence that it needed to be reconnected the very next day following the ‘incident.’

Well, it’s been working fine for the past couple of weeks. Perhaps it’s out of the woods.

AppleCare to the Rescue
If you sometimes wonder if you need to buy the extended warrantee on your tech, my advice is to always get it when it comes to Apple products. That’s because they’re mostly moving about with you. And life happens.

Yes, of course I bought AppleCare for my new AirPods. I may be clumsy, but I’m not oblivious.

Learning to Adapt
And that’s my cautionary tale. File it under ‘the art of wearing your face mask.’

Sure, it’s a no brainer being more careful when removing a mask while wearing AirPods. Clearly, I just have to master that little maneuver.

Unfortunately, I don’t think the need to wear face masks is going away any time soon.

Why I Must Put the Wireless White Sticks in my Ears

I wouldn’t describe my recent AirPods purchase as a joyous moment. Not exactly. It was more a feeling of satisfaction when you check a box on a decision you’ve long delayed. Here’s why.

The morning after Apple’s latest event, I powered up my iMac at 5:30am with my strong cup of Joe and calmly ordered a pair of the newly released third generation AirPods. Usually, my tech purchasing process is more labored with detailed research and spec comparisons. But this experience felt oddly straight forward, probably because my decision to finally buy a pair of wireless earbuds had been simmering for the past five years.

A Sea of Little White Sticks
Over that time, I’ve watched a major percentage of humanity on the streets of New York City grow little white sticks out of their ears. There were so many modified ears out there, it began to feel like my own were lacking. (Talk about herd mentality.) But as I considered augmenting my own ears’ capabilities, I also worried that a precious AirPod could drop out as I hurried about, crossing a street to beat a light.

The Wrong Fit
Of course the AirPods Pro were released to address this specific concern (among many other upgrades). I did visit the Apple Store in Grand Central Terminal a couple years back to try on a pair, eager to finally join the world of wireless earbud users.

But the AirPods Pro simply weren’t comfortable. I know it may take time to get used to the fit, or perhaps I needed a different-sized ear tip. But I turned around and walked down the stairs, empty handed, disappointed and uncertain about what to do next.

I started researching other options from different manufacturers. I went down the rabbit hole of reviews and price comparisons. I procrastinated some more.

Then, Covid hit. My focus shifted. And the next 18 months evaporated.

Better Late than Never
But the patterns of my former life have recently reemerged, and like many commuters, I have finally come out of forced hibernation. I’m back on my Metro North commuter train and walking on the streets of New York.

Immediately, I saw it all again. The sea of little white sticks.

And I wanted to swim in this ocean that surrounded me. I wanted to taste this experience.

So, I decided it was finally time. Time to get a pair of the white sticks. I’d go with the regular AirPods that wouldn’t squeeze into my ears like a Borg attachment. And if one dropped out and escaped forever, that’s life, baby.

I knew an updated model of AirPods were due. So, I just had to wait a little longer for the announcement. Soon, I would finally answer the question of what life would be like without the complexity of wires running into my ears.

An Upgrade to my Experience
The AirPods 3 have spatial audio. That’s great. And they’re water resistant. Excellent. They’re supposed to fit better. I like that.

Sure, I’m pleased that I’ll have the latest and greatest model, but I know I’m hardly an early adopter.

I do expect a better audio experience as I wirelessly tether to my iPhone, though I must admit I’m not an audiophile who must stream the best quality audio into my brain.

What I’m really hoping for is an upgrade to my physical experience as I move through my day and interface with my iPhone. No more messy wires to untangle and plug in.

Wireless is Inevitable
But are wires really so bad? Sure, they eventually fray and need to be replaced. I can’t tell you how many wired Apple EarPods I’ve had to buy over the years… but they’re just twenty bucks a pop. The rechargeable batteries in my new AirPods won’t last forever, and AirPods have an extra zero in their price point.

Today… everything is going wireless. Sure, it’s convenient, offering a clutter-free feng shui in your home. But it’s more expensive. And wireless tech needs to be recharged… and then eventually replaced.

Do you see the clever business cycle here?

A Case for Wires
We’re living in a world that increasingly distains wires. But wired connections, though messy, do tend to be more reliable.

I’m not saying that I don’t expect my new AirPods to perform perfectly. They simply fall outside of the ‘set-it-and-forget-it’ technical mindset.

I know my little AirPods come with a nifty charging case that can juice them up three times. After some use, I’ll need to figure out a charging schedule for the case so it doesn’t run dry when I’m on the go.

Last Man on Earth
My AirPods arrive next week, and once I join the crowd, I’d hate it if my AirPods pooped out (while still popped in). Sure, I’d still look good, but someone would figure it out.

Donald Sutherland would walk up to me and point. And then I’d hear his alien shriek.

What would I do? Perhaps pull out my retired Bose noise-cancelling wired headsets (with the wrong connector) from my Road Warrior 1.0 days.

Whoa! Then, I’d really be in trouble.