Why Do You Need an iPhone with 512GB of Storage? 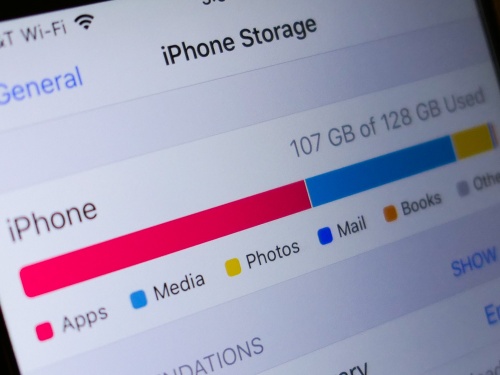 The world has somehow gotten along until now without an iPhone with 512GB of storage. Do you really need this much in your iPhone Xs? Here’s one opinion…

I’m sure I am one of countless Apple fans trying to figure out which iPhone to buy now that the annual upgrades have been announced. And after some serious consideration, I think I’m going to pull the trigger on the massive iPhone Xs Max.

Well, I’ve simply become accustomed to the larger screen of my old iPhone 6 Plus. I’ve got to say that I love my old ‘phablet.’ So, sticker shock aside, I know I’d be totally comfortable handling an Xs Max throughout my day. The big question is whether I really need to max out on the whopping 512GB of storage, which balloons the price tag to $1,449.

The 256GB option already doubles the current capacity of my 6 Plus.
Is it necessary to double it again?

To use all that up, you’d have to maintain a boatload of Hollywood movies on your iPhone or shoot an insane number of home videos.

And it’s ironic that while all media today is supposed to be easily stored and instantly available on the cloud… larger local storage is still marketed as a premium feature.
(But we all know that network upload speeds can’t compete with the huge media file sizes that we’re creating.)

Media Management Still Required
I try to download my iPhone videos to my iMac for long-term storage and then delete many of them from my iPhone. So I haven’t really been facing an iPhone storage crunch lately. But I also haven’t been shooting videos like I’m holding a bottomless bottle of beer.

If there’s one thing to remember when considering a new technology purchase, it’s how you might use it into the future…
(Past experience is not necessarily an indicator of future needs.)

The Downside of Shooting in 4K
I was talking with a work colleague about this question, and he reminded me that you can chew through a lot of memory if you’re shooting video in 4K.

I know 4K video capability isn’t new in iPhones, but for those who are jumping into a 4K workflow on an iPhone, it’s worth remembering the heavy lifting that’s ahead for you…
(And remember, you can’t just pop in a fresh memory card when your iPhone fills up!)

Prepare for Huge File Sizes
Here’s approximately what a minute of 4K video on an iPhone consumes:

If you’re like me and ‘committed’ to 4K video, on average you’ll probably be using up about 500 MB of memory every time you shoot a video clip at 60 fps (assuming a little more than a minute a pop).

So let’s do some simple math:

That’s a ton of clips either way!
(Remember, you’ve got to leave some memory for a few movies, your photos and all your apps!)

So again… who really needs 512GB of storage?

How It Gets Worse
Well, if you’re shooting longer segments on your iPhone such as capturing a 30-minute music recital, the math paints a different story:

It’s Never Enough
Here’s the harsh reality: No matter how much onboard memory you’ve got on an iPhone, you’ll eventually fill it up… It’s just a matter of time if you’re not exporting and then deleting some of your content from your iPhone.

Sure, having 512GB to play with will delay the problem, but eventually, you’ll want to capture that once-in-a-lifetime moment, and your phone will choke.

The Wisdom of 256GB
Yes, there’s a minimum amount of storage that you absolutely need to handle your day to day. 64GB should certainly cover that… But it might get tight really quickly, even if you’re somewhat conscientious about offloading your video clips.

So, Is 256GB the sweet spot if you’re expecting to shoot a healthy number of photos and video clips?

My Surprising Turning Point
It’s costs $200 more to supersize to 512GB.
That’s a lot of money for something you may not need.
But it’s not that much more considering you’re already going to plunk down $1,249.

Well, you’re sure getting the best price-per-GB with 512GB.

And as much as I don’t feel I need 512GB of storage, I know I’ve been known to say you can never have too much memory.

The Decision Crystalizes
So who really needs 512GB of storage?
Probably about 54 people worldwide.

Who feels better having 512GB to play with?

I can’t really defend my choice.
But I think that’s what I’m going to do.

And I know I’m not alone.

I’m going all in on 512GB on my iPhone Xs Max, and one day I may still run out of memory on the darn thing.

But after you think about it for a while, (or write a blog post about it)
…you figure that 200 bucks more may be worth a little peace of mind for the next couple of years as the family videographer.

It’s one opinion…
…for your consideration if you’re in the market for a new iPhone.

Good luck with your decision!