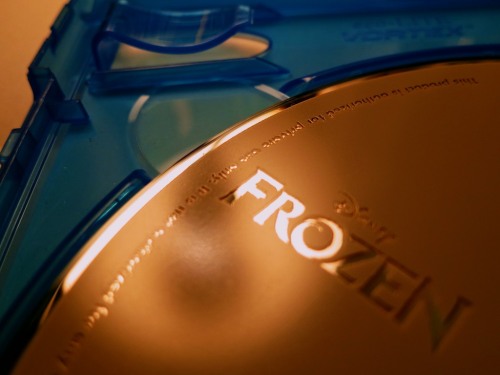 This disc shouldn’t greet you when you open up your new “Frozen Collector’s Edition” case. If there aren’t eleven alphanumeric characters slipped into the insert tab, you can’t get the digital download. But there is another way…

It was a something of a curiosity, because he’d not seen the movie.
(He must have heard the music somewhere.)

I began playing it loud enough for him to hear, and sure enough, I heard him begin to sing along…

Yep… he really liked that song.

So I decided to buy the whole movie for him.
It felt like an obvious next step.
Plus, it won the Oscar for best animated feature film and
has become the top-grossing animated film in box office history.

(All that said, I was still a little concerned about “Frozen’s” PG rating.
Though I figured… hey, it’s Disney.
Plus, I’d screen it myself first…)

He hadn’t seen it when it came out in the theaters last year, because he wasn’t quite old enough yet to hit the movie multiplex.
(We’ll probably ease into that multimedia milestone with him later this year.)

Say “Yay!” for Digital Downloads
I still like buying Blu-ray Discs that also provide a digital download option from iTunes. That gives me lots of flexibility in choosing how I (we) watch the flick, and I’m willing to pay a little more for the packaged deal.

The problem is the movie studios are making it increasingly difficult to ‘own’ your digital copy and house the file within the confines of your physical kingdom.

Instead, they’d much prefer you park it in their ‘cloud.’
So they’ve developed their own cloud-based streaming services like UltraViolet.

I ran into this problem a while back when I was looking to buy
“The Dark Knight Returns.”

I didn’t want to open up a whole new complicated relationship with UltraViolet.
I just wanted to have “The Dark Night Returns” in iTunes and be done with it…

(I eventually abandoned my quest for a disc and just downloaded the movie on iTunes.)

Supersize My Movie
But when shopping for “Frozen” on Amazon, I noticed deep in the small print a vague ‘mention’ of iTunes as a download option.

I scoured the photo of the Blu-ray Disc box and saw no mention of UltraViolet.
(though there is ‘Disney Movies Anywhere’)

So I figured Disney hadn’t gone completely over to the Dark Side, even though they now totally own it.

So I took a chance…
I bought the “Frozen Collector’s Edition” on Amazon for 25 bucks.
Not such a great bargain… but at least it contained the Blu-ray Disc, a DVD, plus the coveted digital copy…

The file would also come in handy for pre-screening in bits and pieces while on the go.
(Not sure I would have 102 minutes to commit to this task all at once)

Where’s my Digital Copy of “Frozen?”
“Frozen” arrived in its non-descript Amazon brown box, and I eagerly slit it open, ready to extract the magic of Disney from the corporeal disc into my iTunes library.

Next, I snapped open the plastic case….

Inside, I saw an insert promoting the wonders of DisneyMovieRewards.com and how to get the original motion picture soundtrack for only $7 with the attached Magic Code.
(Okay… a little ‘upselling’… nothing wrong with that.)

I kept looking.
But it was not there.

There was no code for the digital download!
That insert was missing.

Hey, Disney…
How did that little detail get missed?!
For me, that’s as bad as forgetting to put the disc in the case!

In Search of the Missing Code
You’re supposed to go to Disney’s Digital Copy Plus site to redeem your code.
So I figured there must be a help section somewhere.
And indeed I found an email address to send along my complaint and a specific page documenting what I needed to provide to receive a replacement code.
(I guess I’m not the first to encounter this problem.)

And believe me…It was no small task finding all the requested numbers tattooed all over the box and disc.
Here’s what you need to provide to legitimize your request for a code:

So I wrote down all the digits, checked it all twice and sent off my cry for help to Disney…

“We are Happy to Assist You”
The next day I received what seemed to be an automated response.
“Thank You For Contacting Walt Disney Studios Home Entertainment!”
The email was so perky, I half-expected Mickey Mouse to jump out of my screen…

But my joy was tempered by the next paragraph:

“Since Digital Copy activation codes are subject to expiration, we highly suggest using the above code as soon as possible.”

Understood.
Disney has giveth.
And Disney may taketh away…

I took the warning to heart.
No dillydallying…

Enter the Code
So I copied and pasted the code into the yellow box and waited.
I watched the next URL seemingly struggle to load.
It was as if I had activated some massive back-end protection protocol to ensure I was not scamming Disney.
I thought I sensed a black ops chopper hovering overhead and a thermal scan permeating the room.
(No, it was just the cat purring in the corner.)

But I had the code.
Disney gave me the code!!
This should be straightforward, right?

Guess what?
It was.

The next page finally loaded…
“Success! Your code has been redeemed.”

I was then directed to iTunes and “Frozen” began to download.
(deep sigh)

Don’t Let It Go!
The freeze had ended.
Order was restored in the Lester household.
(though nobody else really knew there was a problem)

And it was finally time to watch the movie!

I will say as annoyed I was with having to go through this unnecessary dance, Disney was pretty quick to resolve the problem.

And coincidentally, the closing lyrics to “Let It Go” seem a fitting end to today’s adventure at home with tech…