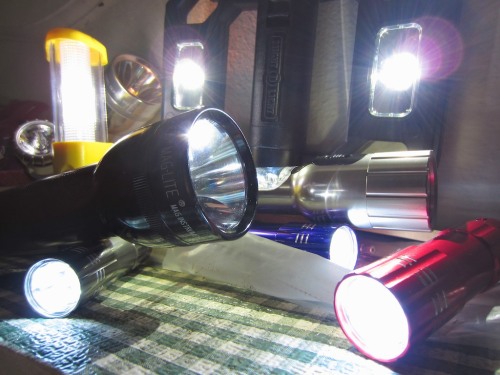 I was powerless in the days after stormy Sandy. But an army of flashlights wasn’t my only available weapon against the resulting digital darkness.

Hurricane Sandy has brought great pain to millions along the East Coast.
But I was one of the lucky ones.

Living in Connecticut, I consider myself fortunate that the only real inconvenience was the loss of electricity.
The power snapped off at 5:30pm on Monday and my house remained dark until Saturday morning.

Still, my ‘Dark Week’ did create two significant challenges for me.

Meeting Maslow’s Hierarchy of Needs
Survival is the foundation of Maslow’s famous pyramid of human needs.
At 5:31pm, this meant finding a way to keep my family warm.

Throughout the week, the nighttime temperature eventually dropped into the forties. And even though our house sufficiently held onto its ambient heat for the first couple of nights, it was clearly going to get pretty nippy as the week wore on.
I wasn’t sure how my toddler would handle these conditions.

Yes, we do have a fireplace, and I had firewood ready to go.
But when faced with uncertain estimates for power restoration, I began to lose my Grizzly Adams’ nerve.

Fortunately, on Halloween night (Dark Night #3), another family we know with a portable generator invited us to stay over at their self-sufficient abode.
(What a treat!)

They are really generous friends, and we spent the remaining Dark Nights with them in toasty conditions. Plus my son had a great multi-day sleep over with their almost three-year-old son. It ended up being their best extended play date ever…!

So the bottom line was… we didn’t suffer… at all.
(I won’t mention the gourmet dinners our hosts cooked up for us.)

Can I Borrow a Cup of Electrons, Please?
The second challenge Sandy left behind was figuring out how to stay connected with the outside world without electricity at home.

Keeping my portable devices alive meant being able to keep them charged.
And that became an immediate exercise in creativity.

Sure, all the emails came out later in the week from a variety of businesses (ranging from AT&T stores to the local health club) inviting me to come on down and charge up.

But twenty-four hours into the power void, it was clear I would need to quickly find my own battery recharging solutions or go totally dark.

This dilemma preoccupied me during Dark Night #2 as I ate dinner in a local Greek restaurant with my family.

As I looked about the restaurant waiting for my Chicken Souvlaki special, my eyes settled on an inconspicuous power outlet near an empty table.

A light bulb went off!
(Battery backup was still working in my head.)

I jumped back into the car and quickly returned home.
By the time we finished off the baklava dessert, my portable tech was charged up and ready for another day.

AT&T Keeps It Together
I began writing this post on my iPad on the morning of Dark Night #3 after locating more electrical refuge at the public library down the street.
I was happily hunkered down in the magazine section while my iPhone and work BlackBerry were topping themselves off at a wall outlet under the Dewey Decimal System.

But being fully charged wasn’t particularly useful if my devices couldn’t connect to a working network.

Remarkably, AT&T’s wireless network had continued to operate in my area after Sandy’s punch and served as my digital tether to the outside world via my iPhone.

That digital lifeline allowed me to make personal calls/emails/texts to family and friends throughout the Dark Week.

T-Mobile Falls Down
Finding a healthy network for my work BlackBerry was another matter.
The T-Mobile network was down and remained mostly offline throughout the week.

How’s a guy in this digital age supposed to work under these conditions?

Of course I had no Wi-Fi network at home.
No Metro North trains to New York City.
No way to drive into the city without recruiting a small army to join me.
(Mayor Bloomberg mandated three passenger minimums on Dark Day #4.)

And I couldn’t send or receive work emails on my BlackBerry.

Time to get creative…

The Wandering Begins
Fortunately, the gas shortages haven’t extended up into Connecticut.
So I felt comfortable driving about in search of a Wi-Fi connection for my BlackBerry.

As I’ve mentioned, my first stop of the morning had been to the library.
I sat there, all cozy… but not truly sated, because their free Wi-Fi was down.
So there was little point to staying.

While I contemplated my next move, several displaced workers wandered in, gripping their laptops, only to be greeted with the disappointing Wi-Fi news at the main library desk.
They compared war stories before heading out again on their own Wi-Fi quests.
I eavesdropped in the corner.

The consensus pointed to a nearby Panera Bread restaurant as the only place in the area with working Wi-Fi
(Not Starbucks?!)
But its parking lot was impossibly jammed. So I didn’t attempt it.

Optimum WiFi Hotspots to the Rescue!
Then, I remembered Cablevision had made a hefty investment building public Wi-Fi hotspots throughout the area for Optimum customers. So I headed out to the main drag, where I knew there were several strong Optimum WiFi hotspots.
But like an old trail horse, my car directed me back to my now empty Metro North train station’s parking lot.
I successfully logged into the Optimum WiFi hotspot and rejoined the somewhat disjointed email fragments from my similarly affected work colleagues.

But I couldn’t realistically hang out indefinitely in the parking lot or at the Dunkin’ Donuts on Route 1.
(You can only drink so much coffee.)

Oh My! It’s MiFi!!
As I mentioned earlier, our friends had rescued us on Dark Night #3.
And yes, their generator and hospitality had addressed all our needs.
Almost…

Their generator wasn’t solving my quest for Wi-Fi.
That’s okay, because my friend has never encountered a tech challenge he didn’t like.
(Remember he’s the one with the foresight to have a portable generator)

He had also previously purchased a little Wi-Fi mobile hotspot generator, called MiFi.
It‘s shaped like a little hockey puck, and connects to your cellular network, creating its own Wi-Fi bubble.

So I linked my lonely BlackBerry to his magical MiFi, and I was back in business!

Lessons from the Lost Week
I woke up on Dark Day #6 to the welcome news that my house had juice flowing again.

My family and I returned home, thankful that we had a home to return to.
And we resumed our lives, pretty much where we had left off a week earlier.

For me, it was mostly just a lost week. No harm done.
With a bit of perseverance and a little help from my friends, I had even managed to keep my digital life from skipping a beat.

But the experience was also a cautionary reminder of how fragile the normal pathways of our lives can be.

If you take a direct hit from the brutal force of a hurricane, lost digital communications will be the least of your problems.

I feel truly blessed that a little digital wandering is all I’ve had to gripe about during my Lost Week.

To Whom It May Concern:
Thank you.
Really.