Driving with Your Smartphone on GPS Duty 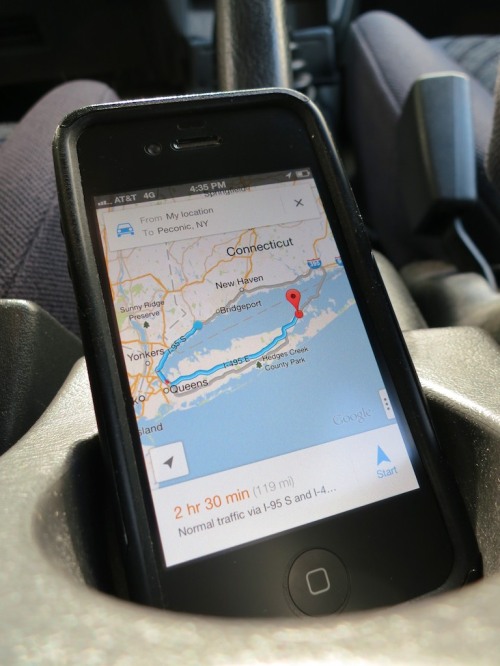 Don’t let another road trip go by with your smartphone sliding about the car as its GPS app shouts out turn-by-turn directions. Mount it onto your dash!

A year ago, I officially broke up with ‘Jane,’ my portable GPS device.

On route to the family summer vacation on the North Fork of Long Island, my iPhone’s native Maps app bested Jane.
(my old Garmin Nuvi 760)
I had mixed feelings, but it was clearly time to move on to newer and better tech, even though my Maps app couldn’t talk to me like Jane.

But Google Maps’ voice turn-by-turn navigation iOS app was just around the corner.
And so was Apple’s, even though ‘Mappelgate’ gave Google Maps the edge.

I’ve spent time with both on the road over the past year, and it’s been a wonderful ride.

GPS will Provide Directions for Food and a Battery Charge…
So why would anyone buy a Garmin or TomTom GPS anymore?
Apparently, I’m not the only one asking this question…
This year, Garmin predicts a sales drop of 20% in its car GPS devices.

It’s easy to understand why the personal navigation market for vehicle dashboards is in decline.

The Stability of My Old Flame
All this said, it’s now a year later, and I must admit…
Jane still comes along for the ride from time to time.

What could she possibly offer to warrant this nostalgic gesture?

Well, in the car, she’s usually more stable than my iPhone.
(Jane has a windshield mount, while my iPhone still slides about untethered.)

I’ve just never got around to buying a holder for my iPhone.
It’s usually positioned head first in the cup holder or maybe slipping about the passenger seat.

Hardly a secure or safe solution.
(for either of us)

Sure, you can rely on your iPhone’s voice navigation alone, but a properly positioned visual aid is always nice, right?

So with the summer driving season upon us, I’ve decided it’s time to fully move my iPhone and its GPS apps into the driver’s seat.
(I mean navigator’s seat. The ‘driving’ app is probably not far off!)

Suction Sucks
As I began my shopping search, I shied away from windshield-suction mounting systems.
That’s what Jane has been using.
And to be honest, she’s fallen down more times than I’d like to admit.
(My wife and I have become quite skilled playing a little game of catch the bouncing GPS…)

Jane has been bounced around so many times, I don’t really worry about her anymore.
But I’m not as willing to expose my precious iPhone to the same dangers.

Windshield Vs. Dashboard Mount
Come to think of it, a suction mounting solution on the dashboard isn’t much better.
Sure, it’s a shorter distance to the floor if your smartphone comes loose, but any air time for your phone is a bad idea.

A dashboard mounting solution is clearly the way to go, but with something more reliable than suction.

How Super is Super Adhesive?
So you can buy a glue-mounted holder for your dashboard.
But how long will an adhesive last?
You can reengineer the manufacturer’s design and superglue the mount, but that plan has its obvious drawbacks…

Choosing Between Mind-Numbing Number of Choices
Even after eliminating the above options, you’re still left with a paralyzing number of offerings.

That said, I did find some online consensus about a few dashboard mounts:

Kenu’s Airframe
This minimalist solution simply clips to one of your car’s air vents.
One concern I have is all that hot air assaulting your device during the winter months.

That can’t be good…

ProClip
This product is for folks who don’t have a problem doing after-market modifications to their cars.
To install one of these holders, you’ve got to do surgery to your dash that’s not unlike rib spreading for open-heart surgery.
You slide plastic mounts into existing dash crevices and then create enough of an opening to install the mount’s base.

When you’re done, you’ve got a permanent appendage jutting out of your dash…

Ram Mounts
These guys seem really serious about getting the job done right.
They handle solutions ranging from kayaks to planes.
But you’ve got to have enough patience to figure out their website to build your specific mount.

If building your own Terminator from scratch is your cup of tea, go for it…

The Bean Bag Makes a Comeback?
The more I looked, the more frustrated I became.
I just wanted something simple that works…

How hard could that be?
The solution doesn’t have to be cutting edge.

Something like when you rent a portable GPS unit at Hertz, and they hand you a clunky bean-bag base.
That monstrosity magically never slides off the dash, no matter how hard you floor it, right?

The Great and Powerful Amazon
So there are plenty of $20-ish bean-bag mounts on Amazon.

Without consensus, I kept looking…

Then, I came across a very highly-rated
Garmin Portable Friction Mount for my old Garmin Nuvi.
(Nostalgic sigh… )

Before I clicked away, an Amazon algorithm made a startling recommendation…

It showed me an iPhone cradle that attaches easily to the Garmin Portable Friction Mount.

It’s like Amazon was saying to me,
“Barrett, you can have your cake and eat it too!”
(The one friction mount would work with both my iPhone and Garmin.)

The Amazon Voodoo Continues…
Further down the page, I noticed a newer version of Garmin’s Portable Friction Mount.
(Also favorably reviewed, and Amazon was running a deal that throws in a Garmin Nuvi case for less than the friction mount costs by itself!)

This one wasn’t a bean bag.
It was a sleeker unit and had a sticky, rubber pad bottom designed for ongoing reuse.

I opened up a new Safari window.
Hello, CNET?
Yep… they liked it.

Breaking Up is Hard to Do
As I considered my choices, I mentioned my little research project to my wife.
She was excited to further activate her iPhone and curious what I was going to do with Jane now that she was retiring…

But I’ve got to admit, I’ve grown accustomed to her face.
And two years ago, I bought my GPS Jane the gift of lifetime map updates…

If only I had spent the fifteen minutes I needed to figure out how to keep Jane from popping off her mount a year ago, we might not be in this predicament.

(Light bulb pops on!)
(though dimly)
Use both GPS Jane and the iPhone!!

How does this piece of twisted logic strike you?…

Are you buying it?
I just did…