What’s Up with Samsung Microwaves? 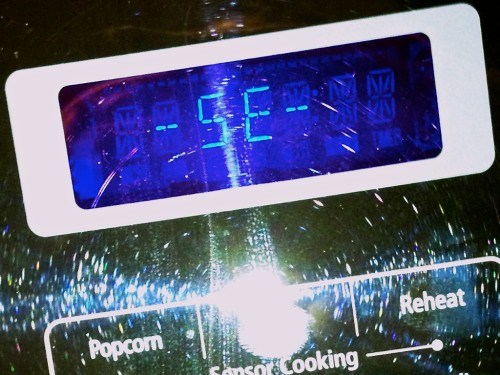 If your Samsung microwave oven is bleeping in distress and displaying the spooky ‘SE’ code, you’re in trouble. Or are you? Your dead tech’s life may rest in the hands of your phone skills…

My Samsung built-in microwave oven stopped working the other day.
And we haven’t even had it for two years!

Now I know humanity has been able to feed itself for most of its existence without this water molecule-stimulating tech.
(My mom did just fine without it while I was growing up and actually refused to ever try one. She claimed it was unnecessary.)

But I’ve got to admit; they’re pretty darn convenient.
90 seconds to warmed-up leftovers is hard to beat.

So doing without wasn’t quite as disruptive as replacing our dishwasher.
(Doing dishes by hand? Horrors!!)
But after a day of rediscovering the power of pure fire, it was time to put on my inspector badge and my Mr. Fix It tool belt.

The Mystery of the “SE” Code
I wasn’t present at the exact moment my young microwave went on the fritz.
(Samsung model SMH 9187 ST)

However, its aftermath glow simply displayed two letters above the keypad: ‘SE.’

I went online to look the code up, and ‘Ms. Samsung’ from the Samsung support site explained it means “Short Error” on the keypad.

Of course, her first recommended fix was for the owner to unplug the microwave and plug it back in…

Nope.
(Does that ever really work, Ms. Samsung? It might be a temporary fix, but what problem like this ever goes away for good…?)

Next… She broke the bad news that it was time to replace the control circuit board behind the keypad.

Fix It Yourself?
I’m apparently in good company with other owners of this Samsung model experiencing the exact same issue…

One enterprising guy posted a YouTube video on how he ‘MacGyvered’ the problem: He opened up his microwave’s guts, pulled out all the ribbon cables and chips from the keypad circuit board, cleaned the connections and then put everything back together.

Then, I found another YouTube video where a Starfleet engineer-in-training also pulled apart his microwave oven and bought a replacement circuit board from Sears Direct for $35.

So I applaud these efforts, but I also read some disturbing warnings online about the lurking dangers inside a microwave. Specifically something called the ‘capacitor,’ which stores additional voltage, even if the microwave is unplugged.

Do It Yourself has a microwave oven repair 101 page which explains how to discharge the capacitor with a screw driver and jumper wires.

Doc Emmett Brown might not shy away from this electrical challenge, but I think I missed his high school class the day he reviewed ‘Flux Capacitors’ and ‘gigawatts.’

So I decided to pursue a different course…

Time to Call Samsung
We’ve owned this microwave oven for just 21 months, and of course the warrantee ran out after 12. And no, I didn’t buy the extended warrantee.

But, hey… a microwave should last longer than 630 days, right?

And it was clear there’s a boatload of other people out there with the same problem.

It was time to call Samsung and ask for a little love.
The challenge would be not paying half as much for a repair visit as it would cost to buy a brand new unit…

Now I can’t guarantee this will always work for you, but here are a few tips how to act when you call up ‘800-Help Me…My Microwave is Broken.’

1.  Ask Nicely
Face it: Your unit is out of warrantee.
Acting all angry and injured will get you nowhere.
It’s going to be an uphill battle, and you’d better be nice.
Remember that hard-to-get date? Yeah… like that.

2.  Ask Twice
When I called Samsung, the phone rep said there was no recall on my microwave, and there was nothing she could offer other than to schedule a repair appointment at full price.

I calmly asked if there was anything at all Samsung could do to ‘work with me,’ since the web was a flurry with so many other customer stories with the same problem.

She said she could bump my question up to a service manager, and I gladly accepted that option.

3.  Do Your Research
When I spoke to ‘the manager,’ I felt prepared, because I had done my homework.
And the fact I was not alone with this particular Samsung failure didn’t hurt.
Also, I tried to act like the two of us were working together on my problem.
(It’s a slight attitude tweak, and it can make all the difference…)

The manager took a few minutes to do her own research, and she returned to continue our ‘negotiations.’

But…
(Let the silence here work in your favor.)

She could offer me a free one-time repair visit, which included parts and labor.
YES!!

Somehow, she could slip my microwave’s failure into their larger recall bucket.
(I didn’t ask.)

4.  Say Thank You
Now that’s some good customer service, right?
I happily thanked the manager for her generous offer…

5.  Take a Picture
So I had unplugged my microwave during most of the SE incident, because the unit was also bleeping in distress.
(like I didn’t know there was a problem)

In fact, I was also ‘bleeping in distress.’
(Though I won’t reveal my actual ‘words’ here!)

Right before the Samsung service technician showed up a couple days later, I plugged the unit back in… to demonstrate its crippled functionality.

My microwave started to cycle on… and then, it just settled… ready for action.
No SE code. No annoying beeps. No problem!

I started to panic.
The technician was due any minute.

I unplugged the microwave again and rebooted it… hoping to duplicate the code.
No luck.

I stood there staring at my mischievous machine.
(grrrrr)

But it couldn’t hold its breath forever.

Then I quickly pulled out my iPhone and snapped a photo of the naughty keypad.

If it found the strength to act healthy again, at least I’d have a picture to show the tech.

But my microwave remained down for the count, and the repairman finally arrived.  He looked at it…
Yep… time for a new circuit board!

A half hour later he was on his way to save the day for another hungry family.  My ‘mighty’ microwave was ready for action… again.
(I forgive easily.)

Best of all, I had invested 0 dollars towards the fix.

Don’t Forget the Honey
So what’s the big takeaway from my little tale of kitchen suspense?

Well… I’ll do more research the next time I consider buying a Samsung microwave oven.
(That said, two years ago this was a top-rated unit on multiple review sites.)

And what company makes perfect tech?
The fact that Samsung stepped up to exceed my customer expectations goes a long way towards my remaining a Samsung customer in the future…

Although… it’s worth mentioning this ‘incident’ follows
my last Samsung ‘adventure’ by just a few weeks.
(Though I can’t blame Samsung for the disappearance of my Blu-ray Player’s remote. That’s another story…)

And again, it really doesn’t hurt to ask nicely for something.
Customers are so angry these days.
(often with good reason)
Your mother was right… A little honey goes a long way!

Samsung… thank you!
YOU ROCK!!

57 Comments to “What’s Up with Samsung Microwaves?”