Are You as Smart as your Car? 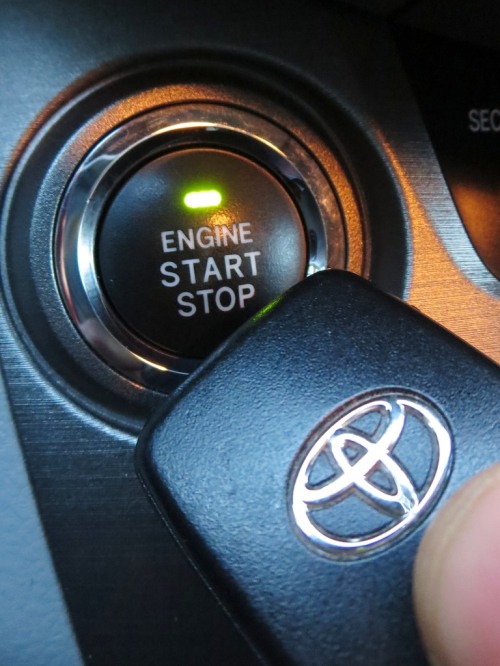 This is the magic “kiss” that you hope you’ll never have to perform with your Smart Key to revive your keyless car. Don’t know what I’m talking about? Exactly…

I love my new car.
It’s really smart.
But now, I realize it may be a little too smart for my own good…

Last time on At Home with Tech,
I survived the car-buying gauntlet, and brought my Toyota RAV4 home.

But my brain was so focused on surviving the deal, I didn’t commit enough neurons to analyzing all the technology baked into the vehicle.

Be Careful What You Wish For
The car comes with a ‘Smart Key’ remote instead of a standard key.
Essentially, it’s a mini transmitter that tells the car’s CPU, “Give this human full access to the vehicle.”
(until Skynet takes over)

All you need to do is carry the Smart Key in your pocket, and the car senses your presence.
When you walk up to the car and reach your hand to the door, the car unlocks automatically.
(an impressive parlor trick)

Once you’re in the car, there’s no ignition switch… just a push button labeled “Engine Start/Stop.”

It seems the future has arrived!

The Risks of Smart Key Technology
Actually, Smart Key tech has been around for more than a few years.
(Mercedes Benz offered the first one way back in 1998… interestingly only a few months after Skynet’s fictional creation.)

Beyond convenience, Smart Key technology is supposed to be more secure, since it uses rolling security codes to frustrate hackers.

But as wonderful as it is, this advanced car tech can lead to some inconveniences down the line.

So if you aren’t familiar with this issue before you buy your next set of wheels…
(guilty as charged)
…at least you should be aware of it before it crops up when your roadster is parked in the middle of nowhere, and HAL won’t open the pod bay doors…
let alone start the car.

A Kiss can Save your Day
So what happens when your Smart Key remote dies?
How do you get into your car without a physical key?

The good news is Toyota thought of that.
They slipped a tiny key into the body of the Smart Key fob.
It’s totally hidden, and you’ve got to press a micro button to activate its release, like you’re 007.

So that gets you in.

But then how do you start the car?
Remember, there’s no place to insert your James Bond back-up key.

So I scoured the manual, did a little online research and then called a local Toyota dealership in search of an answer…

What I discovered sounds almost too good to be true:

If you place the Smart Key right next to the Engine Start button…
(like the remote is giving the button a little kiss)
…that little techy love smooch will magically power up your car when you press the Start button.

Yes, you can awaken your sleeping beauty simply with a kiss…

The Power of Resonant Energy Transfer
The ‘how’ of this tech voodoo isn’t readily accessible on the Internet.
I really had to dig to find what I believe is close to an accurate answer…
(I guess Toyota doesn’t want to give away any secrets.)

The service department rep at my Toyota dealer actually told me that nobody has ever asked her why ‘the kiss’ works before.

Even without a working battery, the Smart Key remote has a passive proximity chip that’s activated when the frequency chip behind the Engine Start button sends out its radio signal looking for the fob’s start code.
(as long as the Smart Key is close enough to the button)

Your Smart Key’s backup system operates much like your work ID card that opens the doors in your office building…
The ID card is called a proximity card and contains an itty-bitty antenna and frequency chip. Your card will receive enough power from the RF signal provided by the door’s reader device for the card to transmit back its presence.
(The whole thing is called ‘resonant energy transfer’… for you geeks out there.)

So in a sense, your car’s Smart Key gets enough juice from the car to ID itself in an emergency and get the car going!

And all it takes is a kiss…

Once Upon a Time…
Sleeping Beauty always wakes up in the story, but I decided I should have a back-up plan, just in case.
(Somehow, my life doesn’t clock in like a fairy tale every day. You?)

So I ordered a couple of batteries on Amazon to power my remote. And I’ll keep them in the car, just to be safe. That way, I’ll be prepared if I need to do emergency surgery on my Smart Key should it decide to loose its smarts and can’t be persuasive with a kiss.

Silly Humans
I know I might be over reacting.
(just a bit)

Besides, this problem isn’t supposed to announce itself without warning.
Apparently, when the Smart Key’s battery begins to go… you’ll notice its shrinking capacity.
Its like when your TV remote starts to weaken….the channel buttons work only occasionally… and only when you push them with ‘great intent.’

Keep it in your Pocket!
Oh… here’s a final word to the wise, should you still be considering joining the Smart Key generation.

Don’t lose your Smart Key.
Your wallet will tell you that’s definitely not a smart thing to do…

For the record, when I bought my RAV4 last month, the salesman warned me it would be an expensive venture to replace the Smart Key.
(He didn’t say how expensive.)

I confidently replied I didn’t intend to lose either of the two fobs that came with the car.

But of course, I was curious what the damage would be.
So I called back my local Toyota dealer.
(I think they know me by name, now.)

I think somewhere out there you can buy a car for $440 that will pass inspection.

That’s a far cry from getting a spare key for a few bucks cut by your friendly locksmith down the street.

That said, I don’t plan on losing my fob.
If I don’t have to take it out of my pocket, why would I ever lose it?
(famous last words)

You’ve Come a Long Way, Baby
I suppose the old practice of putting a key into an ignition switch is rather analog. What’s really so crazy about Smart Key technology?
But isn’t it a little freaky how advanced cars are becoming?

On the not-too-distant horizon, Google’s got its self-driving car project
ready to launch.
One day, ‘driving’ one of those cars is really going to take a lot of trust on my part.

So I’ve decided that smart vehicle should have a wicked-large
glove compartment.  Because I’ll be bringing plenty of back-up batteries…!!

2 Comments to “Are You as Smart as your Car?”