How Your Email can Help Group-Think Succeed 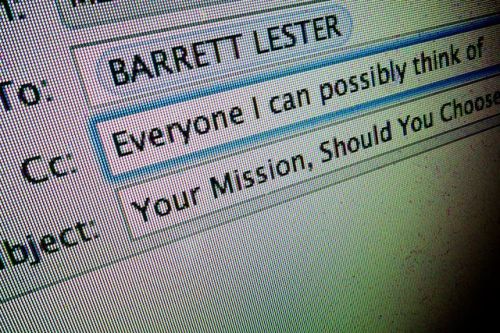 Would you rather be copied on a group email you don’t care about or left off a cc distribution you really need? The answer is why you need to perfect the art of group-talk. Only then can you properly join in group-think!

Technology can separate us as much as it brings us together.

Yes, it allows us to stay connected no matter how far apart we are.
But the inverse reality is it enables people to drift further and further apart.

How many of you work with colleagues in different cities?
…in multiple time zones?
…or on more than one continent?

The age of the work team strictly defined by four walls is long behind us.

So when you don’t have proximity to help you get the job done,
technology picks up the slack with any number of collaboration tools.

As a result, email has increasingly become a team sport.

Group-Talk
The easiest way to keep everyone connected on a group project is to ‘cc’ the whole team on everything.

It’s overkill. But it’s easy.
And it gets the job done.

As a result, what I will call ‘group-talk’ is the standard way to communicate in so many emails these days.

Detractors would say that this ‘buckshot’ methodology isn’t efficient, because everybody doesn’t need to be included on every email.

A more targeted form of point-to-point email strategy would be more effective.
But that’s more labor intensive to generate.
And who’s got the time to maintain individual contact with 6 of the 10 people on an email chain, when ‘reply all’ will essentially get the same job done.

Sure, you’re wasting the time of the other 40%, but the collateral damage is considered mostly tolerable.

Group-Think
Even though we all feel like we’re drowning in too much email at work, the irony is it’s still not enough.
That’s because using email as your primary communications tool has its limitations.
We all know how difficult it is to interpret the emotion index of cold words on a screen, even with the help of emoticons.

Plus, there’s that annoying baseline tendency to accidentally exclude individuals from your group message. Email writers can unintentionally leave participants off larger email distributions.
If the email train leaves the station, and you’re not on it, you’re in trouble.

So to counter this risk, the logic is to over communicate.
If you’re not certain if someone belongs on your email list,
Add ‘em in!

We’re all trapped in what is effectively an endless series of group cyber discussions.

And often it takes this resulting ‘group-think’ to move the ball down the field.
More and more, we’ve grown reliant on email group-think to get the job done.
(not to be confused with the 1972 ‘groupthink’ term which often gets the team to the wrong place)

Group-Do
I’m sure you’ll remember the Borg from ‘Star Trek: the Next Generation’ who were quite the efficient villains.
That’s because their brains were wirelessly connected allowing them to work together as the perfect team.
Much like a beehive.

Individuality had no place.

Today, we are truly more Borg than we realize…

If a Digital Tree Falls in a Forest…
Say you’ve been given the task of cutting down a digital tree.
And when you’re done, you let out of shriek of victory.
But if nobody’s there to hear it, did you actually accomplish anything at all?

I would say you haven’t.

Doesn’t matter.
If nobody else knows the tree fell, the misperception of an unchanged digital forest will quickly overtake the truth.

The Proof is in the Email
What you need is an email that says the tree fell.

You might jump up and down like my three-year-old boy at the idea that people will not trust your upfront commitment to fell that tree.

If everyone needs an ongoing series of cc reminders that you haven’t spontaneously combusted, leaving your deliverable in ashes…

Isn’t there something wrong?

Join the Team
It’s not that bad.
You just need to learn to embrace the concept of a team sport.
Because after all, you work on a team!

And the more everyone remains connected with the whole, the more effective and efficient individual members will be.

This is not about trust.
(Well, it is. But it’s not only about you.)

You’ve just got to look at the equation from the other side.
And as soon as you do that, you’ll see how messy it is.

If we were really all Borg, things would get much easier, because we would all be working in precise unison and harmony.

But we humans… we’re chaotic beings.
Our creative brains are focused in so many places at once.

We’re unpredictable. Inconsistent. Yet so endearing…
(But I digress…)

Do you think your little tree is the center of everyone else’s galaxy?
Do you believe everyone’s got a lifetime subscription to the Force and will immediately recognize the disturbance in a galaxy without your tree?

Look… You’ve really got to provide your ongoing message of progress.
There’s a lot of noise out there.

A team’s sense of timing moving a group project forward is delicate, because everyone can’t possibly know the exact status of each of the moving parts.

Not unless a meeting provides a momentary snapshot or an email reports it!

If you want the Borg hive to assimilate your accomplishment,
you’d better email it out, loud and clear!

Only then will you have successfully contributed to ‘group-do!’

Email can Make You Clairvoyant
Individual accomplishment is clearly still important, but the efficiency of a Borg-like workflow is hard to dispute, especially when the work team is separated.

We all need those emails…

And the silver lining is you’ll never have to remember if you’ve told someone what you’ve done….
Nor pester a colleague whether they’ve done it yet.

Embrace your inner Borg, and join the team.