Buying a Camera For My Four Year Old 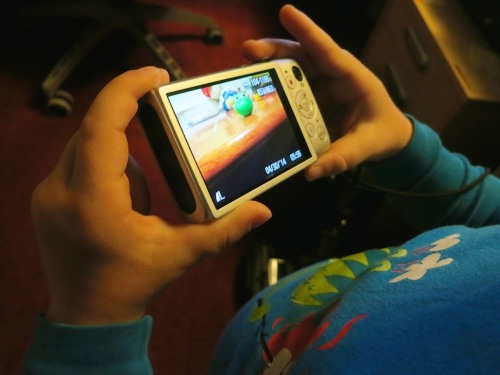 Surprise! My son shows me the latest picture he’s taken with my Canon Elph. I think this may be a sign it’s time for his own camera. But is he ready for the real thing?

When I was seven, my mother bought me a portable cassette tape recorder for my birthday.

This gift arrived after a successful multi-month marketing campaign on my part.
I had expressed all kinds of plans for what ‘sounds’ I would be capturing with its little microphone.

Plus I wanted to launch my very own audio documentary series starring the boy Barrett. Topics would range from ‘what’s for dinner’ to exclusive interviews with the parents.

It was an ambitious plan… and a big ask on my part to begin with.
(This tech of the 70’s was not considered a ‘toy.’)

My father had his doubts, predicting the rectangular device made by Sound Design would end up back in its box, abandoned in a corner of my closet within the week.

But my mom read her parental tea leaves differently.
And it was definitely the right call…

The recorder was a home run.
For years, that tape recorder was never far from my sight.
Looking back now, it was one of the most influential gifts I ever received.

In fact, you can probably track the origins of my career back to that moment.

Deciding on the Right Birthday Gift
This story is never far from my heart as we approach Mother’s Day, which coincidentally falls around the same time as my son’s birthday.

Of course, I’ve been thinking about what to get him as he turns four.
Yes, we’ve already bought the new bike with training wheels.
It’s waiting, hidden in the back of the garage.
(Please don’t tell him.)

While I know we probably can’t go wrong with this iconic gift, I’ve also been trying to review his interests to triangulate another memorable gift.

Earlier this week, it hit me…

My boy has been snapping pictures with my cameras since he was two.
I was so impressed by his ‘early’ work, that I blogged about it.

But letting my then toddler run around with a grown-up camera was always a bit of a problem.
Sure my old, semi-retired iPhone 3GS was a low risk gadget for him to play with.
But I really winced whenever I saw him zipping about with my newer Canon PowerShot Elph 330.
(I’ve experienced my own woes with dropped cameras.)

Today, he’s quite adept at using the Elph. In fact, as I write this, he just sauntered by to show me a picture he took with it.

The solution:
Buy him his own camera!

Clearly he enjoys taking pictures, and he’s got a good eye.
He could be the next Ansel Adams.
(maybe not)

In Search of a Good Toy Camera
So a digital camera for my son it shall be!
Now of course comes the hard part-
What camera to get him?

Certainly not an ‘adult’ digital camera…
That could quickly meet an early demise after a couple of hard drops.
Perhaps something more durable and kid friendly.
(and a bit more economical)

But it should be capable of taking and exporting a decent photo…
(Because when he snaps that magic shot…
I want it to add to the ‘Lester Collection.’)

So I quickly went to work Googling for cute cameras for kids.

And here are a couple choices I found:

So they all hover around the same price tag.
The $30-$50 is reasonable, but are these ‘toy cameras’ any good?

Don’t Buy a Toy if You Want a Camera
Unfortunately, they usually get mediocre reviews due to their low picture quality.
That’s because they’re more toy than camera.
I guess what else would you expect at that price point?

And maybe that’s just fine as a starter camera/game to give to a preschooler.

But adult cameras start at around $100.
That’s really not such a big price gap….

I could certainly convince myself to spend that much on the boy Lester.
That wasn’t the problem.
But I didn’t want to waste money buying a piece of technology that wasn’t durable enough to keep up with the lifestyle of my four year old.

I needed a rugged ‘family’ camera
Shock proof. Waterproof.
Life-proof, if you will…

Nikon COOLPIX W100
Nikon seems to own this market niche right now with its COOLPIX W100.
It’s waterproof to 33 feet, shockproof from a 5.9-foot drop,
and designed to be easy to use.
(That’s code for ‘even a child can make it work.’)

There are other tough cameras out there that take better pictures, but they’re also more expensive…
(The COOLPIX W100 goes for $119.00 on Amazon Prime.)

Used and Refurbished
The used and refurbished market is one way to bring the price down.  Amazon also has renewed COOLPIX W100’s for $99.

But you’ve also got to wonder how long a refurbished family camera will last.
You don’t know how many times it’s already been run over by some family’s robotic toy dinosaur…
(ouch)

Predicting the Future
My verdict:
I’m going with a real camera for my boy!
A new Nikon COOLPIX W100.

Hey, I know he’s only four, but it’s his birthday!
(I guess I should prepare for an ‘onslaught’ of criticism about my four year old not being mature enough to play with a sophisticated piece of photographic tech.)

But for the extra bucks, isn’t it worth having a camera that can take a decent picture? Plus, in a pinch, I can also see an adult snapping a few shots with it.
(He has no problem borrowing my camera… why can’t we use his?)

Plus, it’s a good way to hedge against the humorous nature of
the ‘photo gods’…
Because when that perfect photo moment presents itself, you don’t want to have a toy that shoots muddy blobs as the only available device in reach.

And yes, even if it’s not the best camera out there, it’s still light years ahead of any toy camera on the market today.

Will this be the birthday present he’ll remember for the rest of his life?
Will he blog about it one day?
Or will it end up in the back of his closet within the week?

I guess all we can really do is check back in a few decades.
Then we’ll see how accurate my own tea leaves really were.