Upgrading the Chandelier from Hell 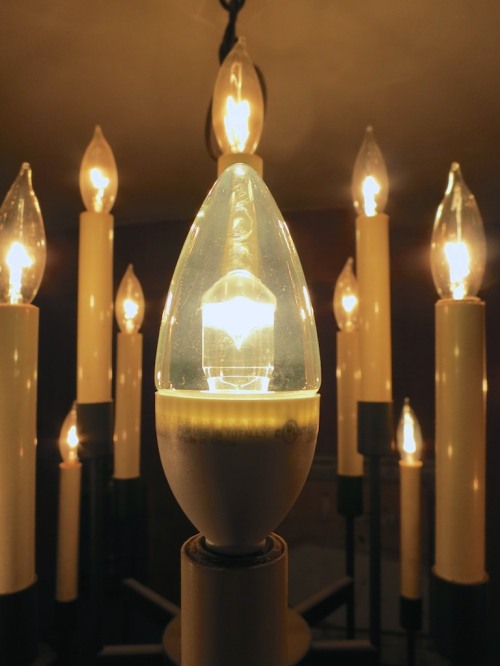 For 50 years, the chandelier in my father’s dining room has been chewing up light bulbs. Year after year… Decade after decade…
It’s like the Guardian of Forever on “Star Trek.” Sitting there… as time streams about it, causing its fourteen bulbs to randomly fizzle.

Poof!
As a boy, I always felt like a day wouldn’t go by when one of these old school incandescent bulbs blew out.

In the chandelier’s early years, my parents happily fed it with a fresh supply of tiny candelabra bulbs. But recently, I’ve taken over the responsibility to maintain this relic.

My dad is quick to whip out his cell phone and call me every time one of the little 15-watt flames burns out…!
(Not that I mind coming by for dinner after I screw in a light bulb or two for him… He’s not quite nimble enough at 82 to climb the stepladder to reach the chandelier.)

And this is not the only electronic antique still hard at work in his apartment…
For example, the Sony cassette player from his ancient sound system was just fixed for the billionth time. Actually, the repair shop gave him a new ‘used’ unit instead of attempting to rebuild the old monster.
(Why a repair shop had a working cassette player hanging around is beyond me. But I digress…)

Time to Upgrade
I’d say over the last half century, the Lester family has literally screwed in over 2,600 bulbs into this freaking chandelier.
(That’s an average of one bulb a week for fifty years.)
Last week, I finally decided I’ve had enough…

It was time to make a change and find a more permanent lighting solution for the dining room.

The fix?
Upgrade to LED bulbs!
You know I have a soft spot for shiny LED tech.
(Plus, these bulbs last for years…)

Unfortunately, as I started to shop around on Amazon, I realized there wasn’t a lot of choice out there for this kind of replacement bulb. Though frustratingly fragile, little candelabra incandescent bulbs with their tiny bases are actually quite elegant. Their simplicity is difficult to replicate with the additional guts baked into the LED structure.

The closest I found in form factor was GE’s Energy Smart Bent Tip LED.
But this handsome replacement costs $15.21 per bulb!

That’s a huge jump in price from the standard GE incandescent 12 pack we’ve been buying. The short-lived beasties are easy to forgive when they net out at just over a buck a bulb.

As I pondered the value proposition of an expensive LED bulb replacement program, I thought I heard the evil song of the ‘incandescent bulb sirens.’ It gently compelled me to continue throwing dollar bills at our chandelier from hell.

But I remained undeterred in my mission…

An Eighteen-Year Fix
I eventually came upon this more affordable LED solution:

The TCP 3 watt non-dimmable bulb
It’s $11.99 for a six-pack.
We’re talking two bucks a bulb.
That’s still a big jump in price compared to Thomas Edison tech.
But it’s a ‘permanent’ fix.
(These LEDs are rated for an eighteen-year life span. When my father hits 100, I’ll buy him more bulbs for his birthday!)

The Show is About to Begin
This particular LED’s form factor is different from the its incandescent cousin:

So these TCP LEDs don’t really match the old bulbs…
…At all!!

After I considered the obvious discrepancy, I had a solution…

I decided to simply ignore the problem and rationalize it as a transitionary limitation! One day soon, my replacement program will be complete, and uniformity will be restored throughout the chandelier.

One remaining question:
Would my father actually buy into my evil plan to fuse LED tech onto his 1965 chandelier?
(No, I didn’t tell him I was about to create a ‘Franken-Lamp!’)

It’s Alive!
I stepped back and looked at the ugly duckling.
Its light quality matched the others.
But who was I kidding…? It still stuck out.

Oooh… maybe this wasn’t such a good idea after all.

I turned to my father.
He looked up.
I listened for a response…

“Good. Let’s get some dinner.”
And then he walked away to get his coat…

Our Guardian of Forever is set to shine bright through 2033…