No More Hulu Plus 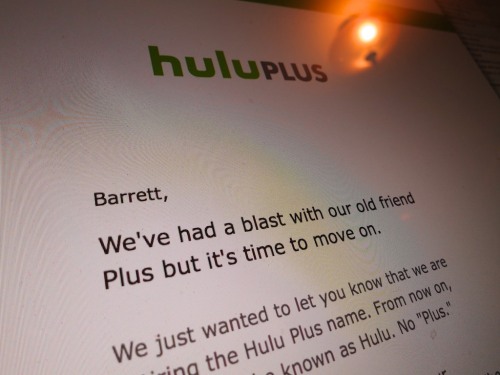 Pop Quiz: Do you know the difference between Hulu and Hulu Plus? Well, it really doesn’t matter any more…

I got an email last week from the folks at Hulu stating that they’ve killed off Hulu Plus. What?  There’s no more paid Hulu service??

So what’s the difference between ‘Hulu’ and “Hulu” (formerly Hulu Plus)?

The email assured me my $7.99 monthly subscription hasn’t changed.
(Of course, Hulu still wants my money.)

Okay…
So what’s going on?

According to TechCrunch, Hulu will still maintain its free and paid tier, but it’s trimming the name ‘Plus’ to eliminate consumer confusion.

The service formally known as ‘Plus’ will continue to stream on mobile devices and provide access to more episodes from individual series.

Hello, Hulu?
A couple years back, I signed up for Hulu Plus with some trepidation. And I was immediately non-plussed when I couldn’t access the entire final season of Fringe.
(Which was the reason I joined up in the first place)

The advantages of the paid plan became even murkier for me as time went on….

So the ‘Plus’ brand change became a reminder to me that maybe I didn’t really need to be paying for Hulu month after month anymore.

Time for a little review of how often I was really using it…
But I already knew the truth… not very much.

Sipping Hulu is Not Encouraged
In theory, Hulu is great.
If you ever miss last week’s episode of your favorite show, Hulu is always there as your safety net.

Once upon a time, maybe that’s all I needed.

Today, let’s just say my busy life as a parent has mostly kept me out of the TV watching game when it comes to committing to any ongoing series.

That said, what Hulu Plus could have done for me is let me start at the beginning of any series and go through it at my own pace.

But the big-time shows apparently don’t often have the patience for media ‘sippers’ like me.

If you’re not generally keeping up with the hungry crowd of weekly watchers, you’re going to get left behind…

The Facade of All-Access
Just to be sure, I did a quick review of what shows I would begin watching on Hulu if I discovered two to three available hours a day…
And here my episode-access report:

As you can see, it’s kind of difficult just to jump into any of these…
Clearly, there are plenty of series that you don’t get full access to… even with a ‘Plus’ subscription!

Less Hulu
If the goal is to simplify Hulu’s main identity as a paid service through and through… I get it. That’s fine.

I know there are probably still more hours of TV programming available on Hulu (Plus) today than days left in anyone’s lifetime who’s reading this.

This name change simply made me face the fact that there’s really no plus for me either.

Time to downgrade.
(for now)

Filed Under: Tech in the News, Tech Trends, Technology
Tags: Hulu : Hulu Plus