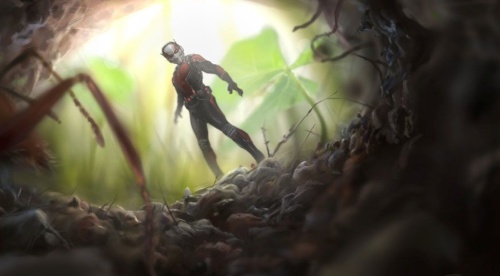 Before this Marvel movie hit the streets, did you know who Ant-Man was? It’s a fundamental question that’s key to any movie’s success. And that’s what movie trailers are for. But the criteria for when and how you’re supposed to consume your movie previews has been upended…

Remember when the movie theater lights would dim, and you’d prepare yourself to get excited over a few movie trailers? Most of the previews you’d probably never seen before, unless you were experiencing the back half of a double feature. (Remember those?)

And what about the thrill you felt when that one amazing movie trailer hit you from out of nowhere? What an experience!

Whenever I bathed in that super glow of movie ‘geekiness,’ I would feel like I didn’t even need to stay for the main feature anymore. How could it get any better than the previous two minutes?

Of course the current availability of online movie trailers has ruined all that. And while I’ve got to admit that the sport of watching and collecting online trailers at home is fun, the experience pales to the purity of in-theater viewing…

No Surprises
Another byproduct of the proliferation of online movie trailers is you don’t need to show up to the movie theater on time.

I used to refuse to walk in even two minutes late…for fear of missing the first preview.
(Often a big one)

Today, I think it’s safe to say I’ve already seen every ‘major’ movie trailer they throw at me. Yes, it can still be more compelling to see it on the big screen, but the crazy urgency I used to feel on the whole matter has gradually evaporated.
(Yes, occasionally, a new movie trailer is first released on ‘day one’ in the theaters and then goes online immediately after… but that’s rare and something of a stunt.)

Movie Roulette
Now, all you’ve really got to do is skip the fifteen minutes of previews and commercials, (yuck) seat yourself just in time for the opening scene, and you’re golden.

Of course, if you play that game, you risk not finding a decent seat….

Plus if you lose, and show up a couple minutes into the flick’s opening sequence, then you become a major pain the butt for all the people sitting behind you.

And that’s really not cool. Nobody wants to miss the first scene of the movie, because you messed up your ‘movie roulette.’

I say it should be more like when you go to a theater to see a play. If you show up late there, you often can’t get to your seat until intermission.
Bravo!

The Rise of the Post-Credit Movie Scene
One type of movie preview experience that thankfully has remained intact (and in fact is becoming ever more popular) is the post-credit ‘surprise’ scene.
Most everybody has already left the theater…
(Who really wants to watch five minutes of credits?)
And then suddenly another scene pops up!

Often it’s something of a throwaway sequence, but sometimes it’s a significant moment that hints at a future film. Occasionally, it is a clip from the next related film!

A perfect example is the credit sequence from the well-reviewed
“Marvel’s Ant-Man.”
(Which I also really enjoyed…. Good talent. Great sense of humor. A story with heart. And a movie that enjoys living in the Marvel super-hero universe, but stands on it’s own. In fact, it was my favorite summer flick!)

“Ant-Man” actually has two separate scenes buried in the credits. The first one points to the evolution of one of the characters. The second appears to be from the next Captain America film- “Captain America: Civil War.”
(There’s no time like the present to begin seeding your future ticket purchase!)

Creating the Cliffhanger Moment
So it’s interesting how the placement of impactful movie-previews has taken something of a 180 and found a new favorite home at the end of the flick you’re watching…. instead of at the beginning.

And in the age of movie blockbusters built on a model of an ongoing story over multiple installments, it’s important to set the stage for the next sequel…

And that’s something of a nod to the cliffhanger model used in the old action and sci-fi movie serials like 1939’s “Buck Rogers”.