Star Trek is Returning to Television? 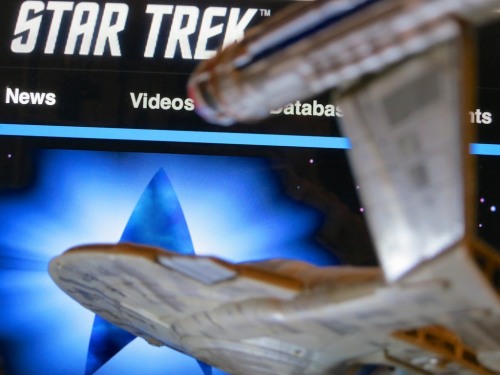 Incoming message from Starfleet: Cancel all of your plans for the beginning of 2017. There’s a new starship traveling at warp speed to a TV near you.

I’m not really sure how to react… I stumbled across the news last week that
a new “Star Trek” series is coming to television in January 2017.

Well, actually only the first episode is coming to conventional television. The rest of the series will only be available on CBS All Access, CBS’s digital video-on-demand streaming platform.

You’ll have to pay $5.99/month to be able to access to this new Trek.
(Unless you’re a personal friend of the “Q”)

The series will not be connected to the current movie universe, though the new show will be executive produced by Alex Kurtzman, who co-wrote and produced both of the current generation “Star Trek” films directed by J.J. Abrams.

Red Alert!
I am a life-long “Star Trek” fan.

I started watching the first reruns on WPIX TV in my parents’ bedroom when I was seven years old while my parents ate dinner. My father wasn’t too happy about that arrangement, but my mother allowed it, I think because she saw how connected I was to the series.

I know I should be jumping up and down for joy at this week’s revelation. My inner nerd entirely sated. What could be better than the return to a weekly “Star Trek” experience?

It’s been a decade since the last “Star Trek” series (“Enterprise”) limped off the air. And the last “Next Gen” movie “Nemesis” crashed and imploded back in 2002.

The entire franchise withered, because not enough humanoids on this planet simply cared to watch anymore.

“Star Trek” was in trouble.

Two Mr. Spocks Were Better than One
Then, J.J. Abrams revived the Federation in 2009 with his early-days version of “Star Trek.” And though his two movies were relatively faithful to the original… in so many ways, it’s totally an alternate universe.

Amazingly, he successfully created another “Star Trek” without alienating the old fan base. He made it his own and yet kept all the important foundational elements. In fact, he brazenly stole iconic moments and old plot points, smartly reengineered them and then placed them front and center.

Those are insane risks… and he pulled them off flawlessly.
He boldly made “Star Trek” his own.

Which is why the known universe is nervously wondering what he’s done with Luke Skywalker, who is noticeably absent from any of the new trailers for “Star Wars: The Force Awakens.”

Fresh Dilithium Crystals
Make no mistake; the “Star Trek” you grew up with is long gone.

That said, I’m quite satisfied with the current iteration of “Star Trek.”
The third movie installment, “Star Trek Beyond” comes out next summer.

It’s been something of a journey for Trekkies but that’s where we’ve happily landed.
(If I may speak for all of us…)

Now, there’s yet another disturbance in the Force.
(I know… mixing movie metaphors)

And I’m not sure I’m ready for it…

I am Expressing Multiple Attitudes Simultaneously
A new TV Star Trek is coming out six months after the hopeful positive glow of “Star Trek Beyond?”

I’ve got so many unanswered questions:

So this Trek lives on its own without the benefit of being a part of the overall whole? That could be a huge limitation. “Star Trek” has always benefited from its own mythology that’s developed through almost fifty years of storytelling.

But perhaps I’m getting ahead of myself.

I’m just a little nervous trying to process this sudden news with practically no details other than ‘January 2017’ and ‘Alex Kurtzman.’

And the idea of having to pay to watch the new series…. that’s also a little unsettling.
(Of course you wouldn’t think twice if HBO picked the show up.)

And CBS will point to the thousands of hours of other programming you can also watch with your monthly subscription, including all of the other “Star Trek” series.

Okay… so what’s my problem?

Live Long and Prosper
Successful science fiction television has proven hard to do. For every hit like the newer “Battlestar Galactica,” “Babylon 5” and “Farscape,” there were also plenty of big duds like “The Starlost,” and “seaQuest DSV.”

Both “Voyager” and “Enterprise” were weaker Trek efforts, though I must admit I stuck with both of them.

Creating yet another “Star Trek” reboot is not going to be a slam dunk…
And not to be attempted just to cash in on the success of the current Abrams’ movies.

I’m just saying…
This new series had better be good!
(I’m not going to rummage through my attic to unbox my toy phaser, tricorder and old model starship collection for nothing.)

Yes, I’m a little anxious, like doting parents watching their child perform in the school play. As a Trekkie (or Trekker), that’s the level of connection I irrationally feel.

Of course, I want this new “Star Trek” to be great!