Why You Should Bring Home a Nest Cam 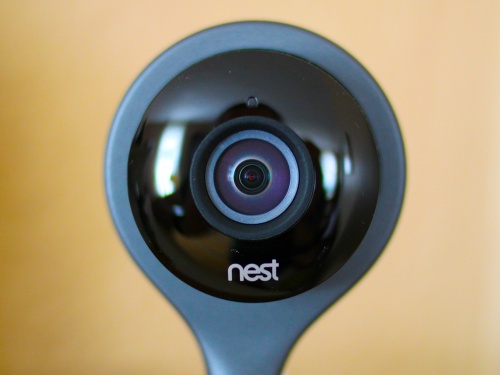 Setting up your ‘android eye’ in the house when you’re not around certainly has its advantages. But getting your own personal HAL hooked into your smart-home’s ecosystem can sometimes be a challenge. Unless we’re talking about tech from the Nest family…

My Foscam wireless IP babycam pooped out the other day. I think it was actually the power supply that blew. The Foscam had been working great for almost four years, and (disclaimer) I think the culprit was an AC surge caused by an electrician trying to replace a ceiling fan in my son’s bedroom.

Okay, he wasn’t officially an electrician…

Cutting Corners
This guy was a general handyman who was doing few other jobs around the house, and said he could handle the fan.

By the time it was clear he couldn’t, we no longer had power in half of the electrical outlets in the upstairs section of our house.
(And no, it wasn’t a popped circuit breaker.)

A few days later, an actual electrician came by to clean up my mess.
(I should thank him for not smirking even once after I told him my embarrassing story.)

Some of the old wiring in my house had been ‘fried’ due to ‘the incident,’ and he ended up having to replace all of the ruined wiring and then the electrical box in the ceiling to bring it all up to code.
(So yes, this homeowner’s original staffing ‘shortcut’ ultimately created quite the expensive repair.)

Lesson learned.
This cautionary tale has made me a true believer in the idea of not cutting corners to save a few bucks when it comes to home maintenance.
(That said, the original handyman was really nice and super apologetic.)

So there was however, one remaining problem….
Our babycam wouldn’t boot up.
Heck, it wouldn’t even blink at me.
It was now just a hockey puck.
(Coincidence? I think not.)

Time to Upgrade
I no longer had a working babycam, which when you think about wasn’t such a problem… My baby boy is now six years old.

Its only use over the past couple of years had allowed my wife and me to check in on him as he slept while we were out on one of our ‘date nights.’

Beyond that, I had used it more as a security cam when my family and I were on vacation to make sure everything appeared normal while we were away.
(Although a view into my son’s room isn’t exactly the best location for a general security cam)

And now the tech gods, after their big chuckle had given me the opportunity to start all over again.

Hello, Nest Cam
Should I get another Foscam?

As much as I had enjoyed it over the years,
my Foscam was actually kind of complicated to set up.

Sure, maybe the newer models would be easier to work with. But I was already leaning in a different direction…

Wouldn’t it be great to simply add onto my growing smart home-by-Nest ecosystem?

I already owned the Nest Learning Thermostat.
Installation was a cinch.
It’s been great for past three years, although
it did glitch out on me one time eighteen months ago.

Then came my Nest Protect in early 2015 to handle smoke and carbon monoxide detection.
(So far, so good.)

So why not add this little Nest security camera to my Nest family?
It seemed like the logical next step.

Plus, Nest happened to be running a Father’s Day promotion deal for its $199 Nest Cam.
(Nest’s marketing folks were kind enough to let me know via a well-timed email.)

Click.
(Amazon still has it at the slight discount of $193.)

Welcome Home
Installation was incredibly easy using the Nest app I already had on my iPhone:

Full directions are posted online at Nest Support.
But that’s pretty much it.

The camera took about 30 seconds to activate and boom!
There it was… fully functioning. I could both see and hear into my living room.

Plus it was both visible and controllable on my Nest app right next to its two Nest cousins.

How great is that?

Setting Up Your Nest Cam

Once you’ve got your Nest Cam up and running, you’ve got a few more choices to think about…

-Placement
One consideration when deciding where to position your new Nest Cam is there’s no pan/tilt functionality like my old Foscam. For me, that’s not really a problem, because the Nest Cam offers a much wider field of view.

Also, you don’t have to worry about limited night vision. The whole room lights up via infrared when it gets dark.

-Motion Alerts
If your Nest Cam senses motion or sound, it can send you a push notification on your smartphone via the Nest app or an email alert… or both.

So if something happens that’s of interest to the camera, you literally know within seconds.
(As long as you’ve got your smartphone with you!)

-Do You Need Nest Aware?
This is Nest’s cloud-based video recording subscription that captures either the last ten or thirty days of your Nest Cam’s recordings.

You can review a moment that just happened or go back days in time with this little time machine trick.

A really cool feature is you’re able to select a specific video section, save it, and then download it to your computer.
(You can also share it.)

While I initially thought I wouldn’t want/need Nest Aware, after spending a couple of weeks with the free month-long trial subscription, I was a believer.

I think the extra hundred bucks a year is a real value add. Plus, you’ve got to remember that most (hopefully all) of the moments you’re going to capture will be happy ones that are family or pet-based. Some of them will likely be worth saving.
(I’ve already downloaded a spontaneous family pillow fight.)

So your Nest Cam security camera will likely serve you more often as a family documentary device. Just don’t go overboard.
(I don’t think you want to start producing your very own, life-long TV series like in “The Truman Show.”)

-Video Quality
You can go with either 1080 or 720 HD video. While whopping 1080 HD sounds great, you don’t want to unnecessarily suck away too much bandwidth if you’re using Nest Aware and constantly uploading your video history to Nest’s cloud.
(Apparently 720p is the most commonly used format by subscribers.
It requires about 200 Kbps to upload, averaging about 60 GB of data per month.)

-Home/Away Assist
This is a feature that can identify when you’re around the house or not through your smartphone’s location tracker.
(So many other apps you’re using already know where you are. Is it really that big a leap to let Nest know too?)

Then, you can set up your Nest Cam to automatically stop recording when you and your smartphone come home.
(Unless you’ve got your own Truman Show going on.)

-Family Account
Of course, the Home/Away feature isn’t going to fully work like I’ve described above if you’ve got several family members coming and going all day long. The good news is you can also set up their smartphones on the Nest app using the ‘Family Account’ feature.
(You just have to invite them through your Nest app.)

So now, not only will your Nest Cam be able to know when everyone has headed out for the day, but they’ll also be able to have the same access to all of your cool Nest products as you do.
(Don’t worry… You still remain the ‘owner’ of the account and retain certain ‘admin’ powers.)

-Better Together
Another benefit to Home/Away Assist is it helps your other Nest gear know what’s going on.

The Nest folks really brag about how Nest Cam, Nest Learning Thermostat, and Nest Protect all work better together.

For me, the obvious upgrade is when my Nest Cam nudges my Nest Learning Thermostat to get with it and better recognize when I’ve left for the day.
(And that will save you a bit on home heating and air conditioning dollars.)

Smarter Home
So there you have it!
My Nest Cam security camera has joined the family.

Is it a total solution for home security?
Of course not.
That’s not why I got one.

But does it significantly add to my ability to remotely monitor and control the health of my home?

Okay…Here comes the visual-
Light bulb pops on above my head.
And cue the sound effect-
“Ding!”

My house is now smarter.
(My cognitive status remains open for discussion.)

Sure, I needed a little zapping to get me there, but the silver lining was worth it.