Four Great Tech Gifts for the Geek in Your Life

Are you having trouble adding tech gifts to your shopping cart? I’ve got four winners at three different price points that can get you to the finish line!

I know… it’s sometimes pretty difficult buying the right tech for that lovable ‘Tech Geek’ in your family. He/she knows what rocks their world, but you may not have total access to all of that ‘unique’ perspective. So how are you supposed to buy the perfect gift?

You’re going to have to ask!
(And that’s okay… you really shouldn’t have to guess…)
And then get started creating an old-fashioned list to work from.

If you want to see my list, I happen to have it right here!
(And feel free to use it!)

You usually can’t go so wrong on a gift at this price point. Especially if the recipient has given you a clue that he/she wants one…

iPhone Lightning Dock
Let’s face it…Your iPhone can’t always make it through the day on its own.
(There’s no shame in admitting it.)

Sometimes, you just need to plug it in for a little extra juice. Wouldn’t it be nice to stop treating that need as an emergency and instead formalizing it with a dedicated device on your desk?

An Apple iPhone Lightning Dock can certainly get the job done.
(Just make sure your iPhone’s case isn’t too thick to use this lightning dock.)

Alternately, you can get one of the newer metal versions for ten bucks more.
$49.00 on Amazon

You could go rogue and look at a sturdier option called the HiRise 2, which doesn’t use such a minimalistic approach. It offers ‘back support’ and also has the flexibility to work with any iPhone case or your iPad…

I really like the adaptability of the HiRise 2 and think the silver model would look great on my desk…
(Plus, because your iPhone sits higher on your workspace, it saves your arm from supporting your Facetime and Skype video chats.)

Just don’t forget to bring along your own lightning cable.
(Alternately, you can buy the HiRise 2 Deluxe, which also comes with Lightning and Micro-USB cables and a heftier $39.99 price tag.)

Touchscreen Gloves
Geeky-gloves with special conductive fingertips that can operate your smartphone have been around for a while now.
(So nothing new here.)

Plus, you’ve got to admit that gifting gloves in general is almost as boring an idea as getting someone a tie.

That said, being able to use your smartphone while wearing your gloves does have real value. I can think of several important moments over the past few years when having the right pair of gloves on a cold winter day would have been so sweet.

I came across this cool-looking wool pair from Mujjo:

If you wanted to upgrade to a more formal leather look, Mujjo also makes a pricier version:

Okay… At this price point, we’re getting more serious…

Sennheiser RF Wireless Headsets for the Family Room’s HDTV
Once upon a time, I envisioned a shining man-cave, and I would build myself an immersive home theater with massive sound that would shake the core of my house (and sooth my geeky soul).
Then I became a daddy, and everything changed.
Now, I’m in eternal stealth mode. It’s not about how loud…. It’s about how quiet.

On the few occasions when I’m consuming TV/video in the family room on my own, it’s usually at night, when our six-year-old son is sleeping.
So I need to wear headsets to maintain evening Zen.
I’ve been using wired headsets for years, and I’ve got to admit… it’s a pain.
It’s time to upgrade to wireless headsets…

As I look at the landscape today, there are a crazy number of choices out there. And honestly, I can’t possibly figure out the very best one at the most reasonable price for my needs.

That kind of research stretches even beyond the amount of time available here at the world headquarters of ‘At Home with Tech.’
(I think I’m on family dinner duty tonight.)

Plus there’s really no one answer…
(I know there are lots of solid choices out there.)

But that said, I decided to stick with Sennheiser and see what they had going with their more current over-ear RF wireless models.

Here’s the current line up:

For me the sweet spot hits at something under $200. So that points to the RS 175 model. Even though the RS 185 really isn’t that much more expensive, the higher-end model is an open headphone design, which leaks more sound, potentially disturbing others in the same room.

I prefer to stick with the closed design of the RS 175, which will assist in my stealth media consumption plans.
(Just being practical.)

Okay… If someone really wants to blow the bank on me, here we go…

GoPro Action Camera
You may have heard I recently trashed my Canon point and shoot camera when I wiped out on my bike while videotaping my six year old riding his new bike.
(I’m okay… other than some road rash. Still healing…)

Yes, I’ve learned the hard way that holding a camera while moving fast isn’t good for my health… So I should probably get an action camera that I can more safely use.
Time for a GoPro?
Think so…

As you can guess from the price, the GoPro Hero Black is the flagship model. It gets great reviews, including this Wired video review by Brent Rose. 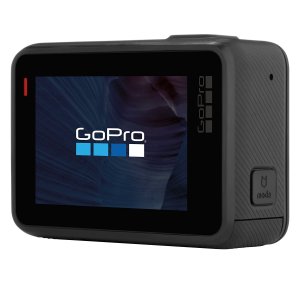 For me, a huge plus is having the small screen on the back.

The others don’t have screens at all. You can view your live shots via an app, but then you’re working with a second device…
(Granted, I know the whole point is you’re not supposed to worry about framing your camera at all. It’s point and go. I guess I’m old school and want to see the framing before a shot begins…)

So in something of an unusual move for me, I’m partial to the most expensive model.

If you also buy GoPro’s ‘’The Strap,” you can then attach your GoPro to the top of your hand or arm, which frees up your hand to pay attention to keeping you safe!

Sure, it’s a costly gift set, but I also call it protection…
(And how can you put a price on safety?)

Plus, my six-year-old isn’t getting any younger. There are more adventures to come. If I want to capture them, I really need to be better prepared…

And going with the latest and greatest will go a long way towards future proofing it.
(At least for the next few years)

Barrett’s Wish List
So, to recap…
I crave the following:

Good luck with your shopping, and may your loved ones act surprised when they get the tech gifts they were hoping for!