Which Premium Compact Camera Should You Buy? 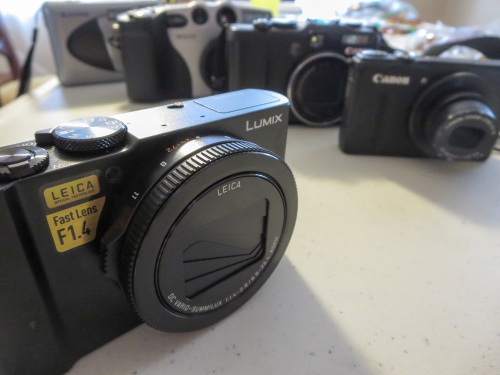 If you’re looking to purchase a new point-and-shoot camera, you should consider upgrading to a premium compact camera. You’ll be able to snap superior pictures and successfully battle photo blur, but it’s going to cost you…

You might be wondering why anyone would want to spend an ungodly amount of money on a newfangled compact camera that can fit in your pocket? Haven’t those kinds of cameras been around forever for a couple of hundred bucks? Plus, can’t your smartphone already take care of all your photo-snapping needs?
Well, not quite…

For me, the challenge is still how to capture a great moment in low light without a flash. That eternal blur is killing me. Unless, I’m shooting a bowl of fruit, any kind of motion creates some amount of blur!

I just want to be able to generate a crisp shot!
But for that, I’m going to need a bigger camera sensor. And I want it in a small camera.

The ‘Better’ Pocket Camera
They’re called ‘premium compact cameras.’
And they belong to a relatively new category of camera that’s supposed to solve the blur problem by using a much larger 1 inch-type sensor that’s typically built into larger and better DSLR cameras.

This upgrade provides a massive improvement over all other compact cameras that use smaller sensors.

If you think that ‘premium’ means it’s going to cost you more, it certainly will…

You may recall I recently destroyed my old Canon S100 pocket camera while performing an especially silly and pretty dangerous parenting maneuver. Since then, I’ve been on the market for a replacement camera. I questioned whether another standard point and shoot would really be that much better than the camera on my old iPhone 6 Plus. Not to mention the more advanced camera(s) on the iPhone 7.
(By the way, I think I’m going to wait to upgrade to the 8.)

And here’s the major reason for the creation of the premium compact camera market. Why else would anyone shell out anything for a pocket camera unless that camera could knock the socks off your smartphone?

And with that ‘promise’ in front of me, I decided to shell out some big dough in search of a little more clarity.

How to Decide…
There are essentially three choices to consider:

Process of Elimination
You’ll find tons of camera reviews out there comparing these options. And you’ll probably spend hours (days) trying to digest it all. (I certainly did!)

I don’t think you can really go wrong with any of these three amigos. But each has its own advantages. There’s no perfect choice.
(Is there ever?)

For me the decision comes down to this…

As much as I don’t feel the need to start shooting my family videos in 4K right now, (1080 is just fine, that you very much.) I want to future-proof this camera as much as possible. iPhones already shoot in 4K. I don’t think it’s going to be that long until 1080 HD video becomes yesterday’s dated 720 HD format.

As much as I’ve been a Canon guy for over a decade, I have to make the difficult decision to walk away from the G7X II, because it lacks 4K.

And I just can’t bring myself to spending a thousand smackers on a pocket camera. That means I can’t go with the Sony.

So that leaves the Panasonic…
Though the process of elimination does lead me here, I don’t feel I’m going with a runner up. The LX10 gets its own great reviews.
(And by the way, I don’t mind that it doesn’t have a separate viewfinder. I never have the time to frame like that. I’m lucky if I can pull the camera out of my pocket and point it at a family moment before that moment has moved on!)

Consider Yesterday’s Model
So I set myself back $700. And I’m not done yet.
(More on that in a moment.)

But before you take the same financial plunge, you should remember you’ve always got a fourth choice…

If you buy an older camera model, you’ll certainly save some money…
(Newer versions seem to get cranked out every year.)

The popular Sony RX100 III is selling for $698 at B&H Photo. That erases my Sony price premium concern. But it doesn’t have 4K video capabilities.

Amazon’s got the original Canon G7X for a hundred bucks less than the G7X II.
But I figure if I’m ready to spend $600 on a camera, then it’s worth ponying up a little more to get the latest and greatest.

As for the Panasonic LX10, there’s no earlier model that enough of an apples to apples comparison.

Should You Buy the Insurance?
I decided to purchase my Lumix LX10 online at B&H for $697.99.
As I looked at B&H’s check-out screen, there was the option to pick up an insurance plan through SquareTrade. (3-years of Drops and Spills for $128.99)

I quickly dismissed it, as I’m not a big believer of insurance for tech gear, except for my Apple products. My curser hovered over the camera-purchase button, but I just couldn’t press it…

My subconscious was communicating with my conscious self…
It reminded me that I’ve broken more than one camera since becoming a daddy. The odds weren’t good that this one could go through the next few years totally unscathed.

Why wouldn’t I protect this camera, as I’m sure to be putting it in harms way?

I’m spending a boatload on this camera! It’s not going to be a throwaway item the first time it needs a repair. So why wouldn’t I buy the insurance?

Accessorize!
Remember when I said I wasn’t done spending money…?
Well, there are a couple of important accessories to consider…

You’re supposed to charge it in-camera using a supplied USB cable and AC charger.
While that felt like a game changer when I opened the box, after I sat with it for a bit, I realized it wasn’t such a big deal.

That said, I am getting that second battery. It would be nice to have a charger instead of always having to shuttle batteries in and out of the camera.

The B&H guy told me Panasonic hasn’t come out yet with its charger. But you can buy one from this manufacturer…
The Watson Compact ac/DC Charger Kit with Battery Adapter Plate for DMW-BLH7 is $19.95 at B&H.

It’s Not So… Small
And how pocketable is the LX10, really?

Does the LX10 fit in my front pants pocket? Yeah…technically.
But honestly, it’s kind of tight.

I’ll make due…
(There’s no smaller camera with the same specs… especially a fast 24mm lens at the wide end.)

The Bottom Line
So I’ve got three takeaways to review as you consider your own decision:

#1
I love my new Panasonic Lumix LX10. It’s built like a tank, and my early photos look super!

#2
Yes, I’ve been suckered into buying into the world of 4K video to create my family videos.
(But I bet my future self will soon come back in time to thank me for this forward-thinking move.)

#3
If a camera costs a lot… go buy the insurance to protect it! You don’t have to feel good about the fact that you need it. (I still don’t.) Just do it. Trust me.

You can’t control your world. But now, you can certainly take better pictures of it. At some point along your photo-snapping journey through life, I expect you’ll decide it’s worth it to spend the extra money.

As my father likes to say, we go around once.
Get the nice camera…