Why I Bought This GE Microwave Oven 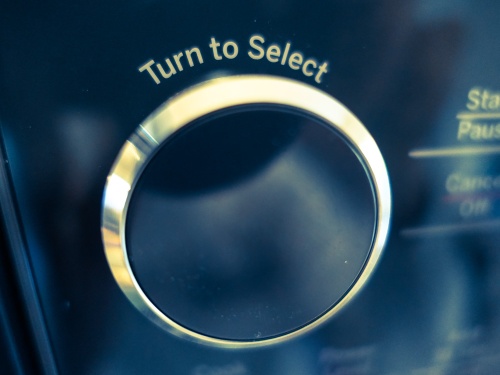 I won’t deny I was attracted to the few tech tricks it offers beyond heating up food fast. And it all starts with a little circular logic….

I said goodbye to our glitchy Samsung microwave oven last week. As some of you know, I’ve had something of an ongoing rocky relationship with this temperamental unit.

Since my wife and I were doing some other work in our kitchen, we decided it was finally time to move on.
(Across five years, there were multiple pain points… First, the microwave’s control panel blew out after two years and was repaired for free. Then, the turntable mechanism stopped working… and more recently, the vent control has become glitchy.)

Yes, technically, the microwave still works, and yes, I could pay more to repair its existing nuisance problems, but it was an easy choice just to say, “Toodle-oo!” and start again.

I expect that microwave reviews probably aren’t top of mind for Samsung these days as they try to move beyond ‘Galaxy-gate.’
(That said, I really liked Samsung’s commercials at the Oscars.)
But I’ve seen ongoing interest in my 2013 Samsung microwave post.
I do hope the future brings better news…

One reason for this particular choice was to create a matching range/microwave pair from the same manufacturer.

Not that it’s wrong to mix manufacturers, but after our Samsung experience, it seemed like a safer bet to go with a brand we felt more confident in.
(Yes, simple brand loyalty to GE)

Chef Connect
I wouldn’t exactly say this GE was a ‘smart microwave,’ but it does come with a Bluetooth feature called “Chef Connect” that pairs it to our GE range.
(Cool!)

But what exactly does that get you?

Are these upgrades really that useful? Or are they more like parlor tricks? A synced clock is always helpful, but do I really need more light and fan support every time I turn on the range?

Well, I certainly don’t need the fan every time I decide to boil an egg, but the automatic light trick intrigued me. So I activated it:

And then you select which of the three tricks you want to turn on
Easy as pie.
(Sorry for the pun)

The only wrong turn I made was incorrectly assuming that Chef Connect was somehow related to the “WiFi Connect” feature the range possesses, which allows me to monitor the range with an app on my iPhone.
(No… Chef Connect and Wi-Fi Connect are totally different.)

True enough. But beyond “Chef Connect,” this microwave’s got a few other features I’m already warming to:

But Wait…There’s More
This particular model is also a ‘convection’ oven. While I honestly don’t know how often we’ll be using the feature, it seems like a valuable functional upgrade for our kitchen to have two ‘ovens.’ So if we’re cooking dinner in the main oven below, and there’s a sudden craving to bake some chocolate chip cookies, we can now do that using the convection oven feature in our new microwave.

Convection tech does push the price tag up a hundred bucks to a ’pricier’ $599 MSRP.
(You can get a base-level GE microwave for less than three hundred bucks.)

But I had already decided to spend a little more on this unit, hoping it would stand up better to the test of time than my not-so-old Samsung did.
(However untrue that logic may be)

The Internet seemed split right down the middle when I did a little research on how the world feels about convection tech baked into microwave ovens.
But I decided to go for it anyway.
(Any feedback out there on my choice?)

At Home with My Kitchen
So we’ve got a new GE microwave/convection oven.
Whoop de doo…

And it’s got a few tricks up its sleeve using Bluetooth tech.
Good enough.

And for now… I feel like my shiny, new kitchen tech is there to
‘improve my life.’  Translation: It’s not a headache… not yet.

One Comment to “Why I Bought This GE Microwave Oven”