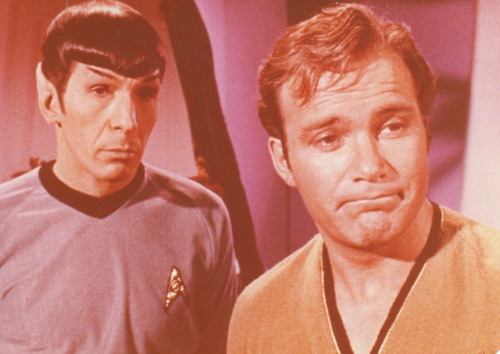 I’m sure Kirk and Spock would be a bit more than a tad surprised if they heard some of the bad language coming out of the latest “Trek” iteration.

“Star Trek” has always been about breaking down barriers.

Now, “Star Trek: Discovery” has one of those barrier-breaking scenes that Trekkies will talk about for generations to come. It’s from the “Choose Your Pain” episode.

No, there’s no kiss in this fifth episode of the young series, but we see Lt. Stamets and Dr. Culber brushing their teeth together in their quarters and articulating some clearly intimate feelings. We have our first openly gay crew members. It’s a gentle and charming scene in a show that’s bombarded with harsh uncertainty. It’s well written and another important “Star Trek” moment that supports and builds on its universe of inclusion.

That, in itself distinguishes this episode as one to remember.
And it’s all I should be writing about.
(Other than we are introduced to a young Harry Mudd.)

But unfortunately, that’s not all that differentiates it.

Star Trek and the Four-Letter Word
In what actually felt pretty awkward to me, the writers also decided to throw some bad language into the script.

Variants of the four-letter ‘F’ and ‘S’ words, to be precise.

What???
(I had read this would be coming, but dropping the F-bomb still felt a little shocking.)

Look, I know that “Discovery” is a more gritty and edgy series, and there’s clearly a lot of violence.
So, what’s the problem with a few four-letter words?

We’ll, first off… it just seemed gratuitous. It didn’t feel any more significant except to inform viewers that the universal translator for this “Trek” doesn’t restrict *uck and *hit.

There are no CBS broadcast censors to worry about here.
(Hurray?)

So, I guess anything goes.
I feel it was clearly a message more than anything else.

How inclusive is that?

Are the producers so desperate to distinguish their pay TV niche to attract only adults who enjoy their “Game of Thrones?”

I get the value proposition that if you’re going to pay for your “Star Trek,” the producers have got to give viewers more than what’s available on broadcast television.

What’s interesting is the writers waited until the fifth episode to sprinkle in the three words at issue.

Hmmm… Actually, how bold is that?
If there’s going to be bad language here…. it should be present… front and center from the beginning of the series.

The Orville Surges Ahead
Speaking of trying to boldly go where no one has gone before, “Discovery” has another challenge to deal with. It continues to be scooped by the spoof over at Fox.

“The Orville” established its own onboard male couple (Bortus and Klyden) in its second episode. Sure, it’s a little different, because there are no females in their alien species.
(Well, not exactly)

And I’ve got to give some kudos to this “Star Trek” wannabe, which is rocking with some big-time guest stars – Liam Neeson and Charlize Theron.

I’m also really tickled how Seth MacFarlane is weaving in references (or boldly borrowing) story elements from some science fiction I grew up with… like “The Starlost” TV series from 1973 with Keir Dullea and 1989’s “Millennium” movie with Cheryl Ladd and Kris Kristofferson.

All of this is to say that “The Orville” in all of its silliness is showing lots of promise.

For Adults Only?
“Star Trek: Discovery” has promise too.

On a lark, I decided to take a look again at the first episode of “Star Trek: The Next Generation”
(CBS All Access gives you instant access to all “Trek” episodes.)

Whoa!!
Those first awkward minutes from “Encounter at Farpoint” have not aged well at all. We Trekkies really gave that series a lot of leeway until it found its footing.

But it was a series that everyone could watch.

All I’m saying here is I hope “Discovery” doesn’t continue too far down its path of targeting adult viewers only.

A Child of Star Trek
There has always been a younger generation of fans who were inspired by each version of “Star Trek.”

I was among the first wave, and honestly, I can’t imagine being told by my parents that I couldn’t watch “Star Trek,” because it wasn’t appropriate for kids.

Now, it’s true you can make the argument that “Discovery” is already too violent for children, but you wouldn’t find universal agreement on that point.

But you just can’t get around the F-bomb.

That particular barrier doesn’t have to be broken.
It will just put up another one for younger viewers.

Message to “Discovery” writers:
Please clean up your potty mouth!