Looking for My Nextdoor Neighbors 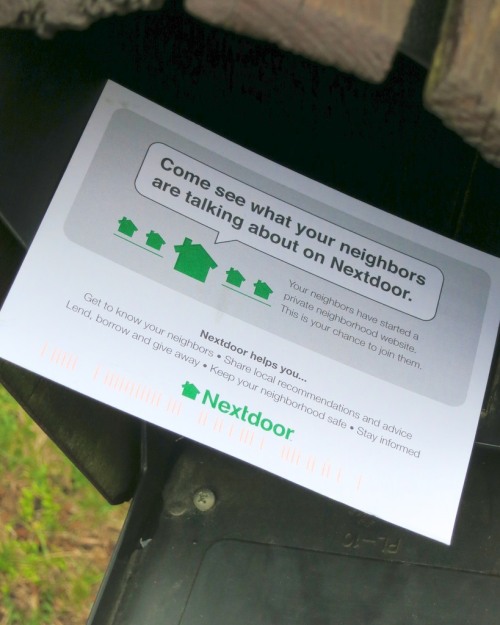 If you’re looking to become a little more neighborly, you can bake some cookies to share or join Nextdoor.com.

I have a confession to make…
I am not neighborly.

It pains me to face the truth, as I usually like to think of myself as a friendly guy.

But I’m still a bad neighbor.

Don’t get me wrong…
When I see someone on the street, I smile and say hello.
The problem is… I’m a commuter.
A road warrior in fact, if you haven’t heard.

The simple problem is… I’m not around that much to act neighborly.

Yes, I’m more about on the weekends now, since spring has finally sprung.
And I’m often out walking with my preschooler, who is usually his own ambassador.
He’s such a friendly little guy.
(I’m so proud!)

But it’s hard to create my own individual neighborly moment when I’m competing with such cuteness.
(He’s got a killer “hello…!”)

No, I don’t mean I want to Skype my neighbors, when I can easily walk outside my front door to say hi.

Nextdoor.com to the Rescue!
These days, there’s hardly a problem in life that can’t purportedly be solved by technology.

And guess what?
The wonders of modern home tech do offer, in fact, an aid of sorts to mitigate the effects my little affliction, which we’ll call ‘BCS.’
(Bedroom Commuter Syndrome)

The cure to Barrett’s BCS is a website called Nextdoor.

Nextdoor.com is a private social network for your neighborhood.
Kind of like a micro, local Facebook that only your neighbors can join.
It’s been around since 2010 and according to TechCrunch, boasts over 10,000 neighborhoods nationwide.

This is how it works…
They ask the first neighbor to designate the borders of their neighborhood via an easy-to-use map.
(more on this in a moment)
Then they take the important step to confirm you actually live where you claim to reside.

How do they do this?

I selected the postcard option, because I joined up a couple weekends back when I was visiting friends out of state.
(which unfortunately doesn’t qualify as acting neighborly)

I wasn’t at home to receive the confirming phone-call option.
Nor did I want to unnecessarily give out my credit card number online since I wasn’t buying anything.

But when I got home, I became impatient.
I didn’t want to wait the extra few days for the postcard to arrive.
So I logged onto to Nextdoor and simply reselected the phone option.

My landline number displayed on the following page.
(another example of a digital society without secrets)

Done!
(I guess there is a reason to hold onto your landline number!)

It’s Alive!
So, my Nextdoor neighborhood had a heart beat.
How exciting!

But that was the easy part…

Nextdoor gives you only three weeks to generate at least ten members for your virtual neighborhood.

Or they take your neighborhood website away from you.
(How harsh!)
The idea is to allow someone else (presumably more popular) to generate more interest, if you fail.

So my quest for neighborly redemption was not over…
I still needed neighbors!
Nine more to be exact, and the clock was ticking.

Fortunately, I had an old neighborhood list with phone numbers and email addresses.

I sent out the invites.
And I waited.
…and waited.

While I stared at my empty virtual neighborhood, I decided to focus on low hanging fruit.
I got my wife to join.

Well, I actually signed up for her.
Is that breaking the rules?
(at least I had her consent)

Three days later, one friendly neighbor next door accepted.
I was on my way!

Dark Clouds Roll In
Then I got an email from another neighbor.
She couldn’t join!
What?!

She sent me a copy of her denial message from Nextdoor.
It explained she was living outside my neighborhood on the other side of town.
But she lives right down the street!!

Clearly, Nextdoor has a mapping problem with certain addresses.
My neighbor emailed tech support explaining the issue.
(That kind of glitch can be a deal breaker… don’t you think?)

And for the next few days, it was radio silence from everyone else.
(Perhaps they were being denied as well?)

I was stuck at 30% of the required membership level.

Tumbleweeds Abound
As of last weekend, it was looking like my virtual neighborhood was doomed to early oblivion.

Maybe I had to face the fact that every story doesn’t have a happy ending.
Or adjust my life to become a better neighbor in person before I could enjoy a neighborly life online?

I was ready to throw in the towel…

Delayed Execution
At the eleventh hour, I decided to delay the news of my defeat.

He enjoyed his strawberries so much, he ‘adopted’ one of the really plump ones.
Meaning…he opted instead to carry it around in his favorite cozy blanket, like one of his furry animal toys.

Together with his new strawberry companion, he started snapping some really cool pictures using my old iPhone…

So while I wrote about my son last week, and featured a collection of his cool photos, the news of my sputtering Nextdoor project sat idle.

Another neighbor accepted my Nextdoor invitation.
And another!

And they began inviting even more neighbors…

…My virtual neighborhood was officially born!
We hit our critical threshold, and we were off and running!

So Far, So Good…
Immediately the online discussions began…
I started a chat about street trenching work by the gas company, and two neighbors responded with helpful updates!

And my family and I have already been invited to a party down the street!

Even that one denied neighbor (and another with the same problem) got Nextdoor tech support to quickly resolve the mapping error.

They are now happily a part of our virtual community.

Come on…
Sing along with me as I do a little victory dance!

Excuse me. I’ve got to go.
My recycling box outside just blew over.
(It’s been kind of windy out…)
And it contained about 5,000 of those packaging styrofoam peanuts from a discarded Amazon box.

Oh no! They’re traveling down the street….
Now, they’re airborne…

I’m shutting my shades and hiding…