How to Project the Time While You’re Sleeping 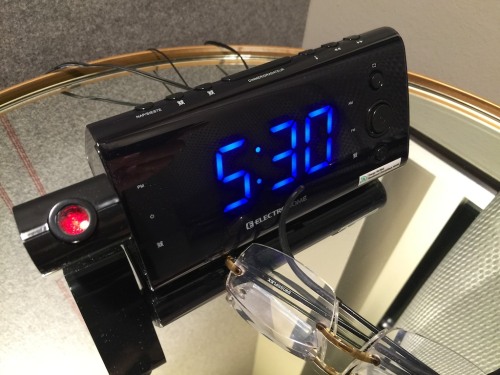 Well, you’ve got to wake up first and take a look at your alarm clock.
Reading any clock is so simple. Right? But not so easy if you can’t read the digits without your glasses. The solution… How about a projection clock for your ceiling?

I may not be the most organized person in the world, but when it comes to sleep, I don’t mess around. I consider myself a champion sleeper! I’m serious about my slumber and approach it with a clear sense of structure.

You know when sometimes you fall asleep at night and then wake up the following morning, not knowing where you are or what day it is? Sure, that’s occasionally happened to me, but usually I maintain a general sense of subliminal awareness throughout the night.

Master Sleeper with Wimpy Eyes
Of course, I’m not the perfect sleeper… I typically wake up once or twice a night.
(I’ve been quite consistent in this pattern over the years… )

When I do, I usually like to check out my old clock radio to see what time it is.
(Don’t you want to know how much time you’ve got before your son rises?)

And then I quickly slide back into my dream world.

The only problem is I can’t quite read the time anymore on the digital display…
That’s because I’ve shoved my clock radio to the back corner of my night table.

It’s long ceded its rooster role to my iPhone 6 Plus, which lies a foot away from my head… charging up every night, always ready to wake me the following morning.

If I try to peer beyond the iPhone to see what time it is, everything’s mostly a blur.
(I’ve worn glasses since I was a kid.)

Sure, I could reach over and press my iPhone’s home button to check out the time, but that kind of action pulls me too far out of my desired sleepiness.

And if I stretch my neck forward until the clock’s digits come sufficiently into focus, that’s also too much effort… again risking a more alert state.

How’s a guy supposed to know what time it is in the middle of the night?
(And no, I don’t like wearing my watch to bed.)

A Virgin to the Projection Clock
Last week, I flew to Chicago on a business trip and stayed at the Virgin Hotel.
It’s a swanky place with rooms adorned with nifty tech enhancements.
(Bluetooth speaker next to the bed and motion-activated lights near the bathroom)

At breakfast after the first night, one of my colleagues said, “Hey, did you see the time projected on the room’s ceiling?”

When I got back to my room, I rushed over to the night table and peered at the ordinary looking clock radio. Then I noticed an adjustable red light attached to the side pointing upwards.
(Much like a Borg’s cranial laser attachment on “Star Trek: The Next Generation.”)

I looked up, and indeed, there was the projected time in cool red on the ceiling.

That night, I put it through the rigors of the ongoing ‘Barrett Sleep Project’…
I woke up at 3am and simply looked up.

Electrohome to the Rescue
So is “swivel time projection” the simple solution to my bedroom clock problem at home?
I think it is…

It’s not everyday I see something in a hotel room and have the urge to buy it for myself, but this one seems like a no brainer.

It’s made by Electrohome and called the USB Charging Clock Radio EAAC475.

There are other makers of projection alarm clock radios out there, but I’ve already had a successful field test with this one. Let’s keep this little ‘project’ simple.

Amazon Prime sells the Electrohome  for $27.99.

Click!
Just make sure you get the model with the blue LED face display.
(As opposed to the less elegant white LED version)

Z-Tastic
Alarm clocks have been around for decades, and this projection clock tech isn’t especially new.
(It’s a clear tell when an otherwise nifty tech enhancement is included at such a low price point.)

Revolutionary or not, I’m happy to report I’ve solved my sleep problem.
(I mean my ‘awake’ problem.)