I Taught My Son to Fish 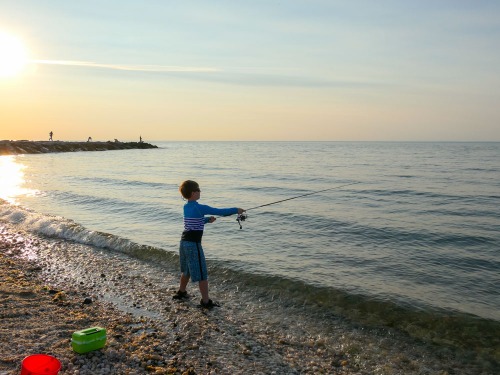 As a parent, there are moments you’ll remember for the rest of your life. Some are big. Others are small. But you know when they’re happening…

This is not a story I should really brag about. But I’m a city boy who grew up on the gritty streets of New York City in the 70’s.
(Okay… it was on the upper east side of Manhattan… it wasn’t that bad.)

My grandfather was a big fisherman. I remember a time when I was around seven or eight sitting in the back seat of my uncle’s station wagon as he drove me, my dad and grandfather to some secret fishing spot on Long Island. It was early in the morning. I don’t remember the fishing so much, but I remember the driving. And the cigar stump my uncle clenched in his mouth as he drove.

But I know we fished. Well, they fished. I can vaguely visualize having a pole in my hand, but I wasn’t the one who pulled in the big one that day. I would have remembered that.

As a younger adult, I went on a few afternoon fishing cruises in New England as an anonymous member of a touristy crowd. I recall not catching a lot of fish and getting a little sea sick.

Prepping Your Gear
I share all of this as background to suggest I was not especially well prepared to introduce my seven-year-old son to the sport of fishing on our recent beach vacation to Peconic on Long Island.

We’ve been going to Peconic for years, and the idea of fishing naturally evolved after several years of exploring the local marine life with little ‘kid-friendly’ nets near the inlet where we stayed.

It was simply time to try some fishing with a rod.

So, I went to DICK’S Sporting Goods to pick up a couple of inexpensive fishing rods with reels. I have to give a huge shout out to Dick’s, because an especially knowledgeable salesman helped me pick out what I needed and even showed me how to tie a hook and bobber to both fishing lines.
(Okay… he did it all for me.)

Beginner’s Luck?
I walked out of DICK’s Sporting Goods ready to fish.

But I wasn’t really prepared.

The good news is there was a local bait shop in Mattituck near where we were staying. That place was my home base/repair station to keep me going. Because fishing with kids isn’t easy.
(Yes, that’s plural… more on that soon.)

On our second beach day, I pulled out the two poles from the back of
my Toyota RAV4 and handed one to my boy. He was beaming with excitement.

We walked down to the shoreline, and I put a little frozen shiner from the bait shop on my son’s hook. It took a couple of tries for my son to get the casting thing going, but within a few minutes, he had his line successfully in the water, about thirty feet out.

And then the magic happened. He caught a fish! It was a little snapper. He pulled it in and couldn’t believe his accomplishment.

I got the snapper off of the hook without harpooning a finger and plopped the fish in our bucket of water. I wanted to call out to my wife to start to pack up.
Because I felt it couldn’t get any better than this.

I knew that sooner or later, my general lack of fishing skills would be tested.
And believe me, they were…

But the good news is over the next few days… I learned a lot about fishing.

A Few Fishing Tips for Parents
If you’re a fishing newbie like me, I’ve got a few pointers to share.
(The rest of you are welcome to stay if these obvious revelations somehow amuse you.)

The upside is we pulled in over a dozen snappers. And my son’s delight continued to grow.
He’s hooked.

Living off of the Land
And what did we do with all of the snappers we caught?

We brought them home and cooked them up!
(Pan fried them with flour and olive oil.) 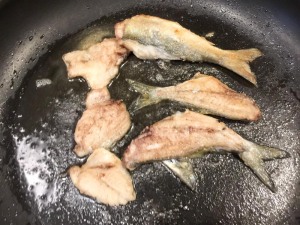 No, I wouldn’t say they were especially filling. The fish were all pretty small. But the meat was tasty. Think of them more like an hor d’oeuvre.

But the experience of catching and then eating your own food for dinner was transformative.
It felt so natural. So… independent. So… empowering.

Eventually, we even used little minnows we caught as bait.
Yes, we became entirely self-sufficient in our ‘food-acquisition process.’

Which is a terrible way to say we fished for our dinner.

At Home with Fishing?
I know fishing is a skill which is hardly rare, even in today’s technology-infused culture.
But for a city boy from the 70’s and a nerd who prides himself for being at home with tech… (usually)
…it’s a significant step.

And I think my grandfather would be proud.

More importantly, I taught my son to fish.