Why “Star Trek: Discovery” and “The Orville” are Tearing a Hole in My Mind and Wallet 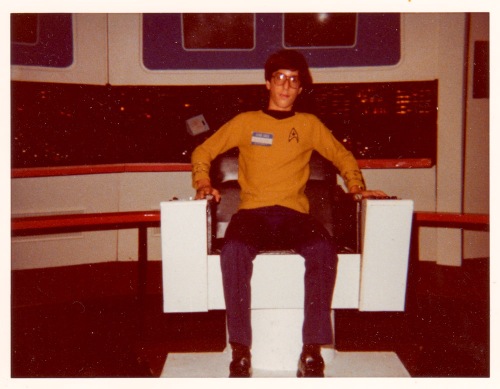 I’ve been a Trekkie all of my life. Here’s a photo of me as a teenager sitting in a replica U.S.S. Enterprise captain’s chair at the 1976 New York City Star Trek Convention. Does this demonstration of core-level nerdiness qualify me decades later to offer my first impressions of “Star Trek: Discovery” and “The Orville?” You bet it does!

I feel like I’ve entered a sci-fi nexus. A place where I can clearly see a warped “Star Trek” from my past and a newly phased, slightly alternate-reality version for the future.

A little confused? So am I.
(Though not entirely displeased)

All right everyone… go find your Spock ears and put them on. This is going to get a little geeky…

Two New Versions of “Star Trek”
It may feel like blasphemy to tinker with the old “Star Trek” some of us grew up with. But as I’m sure you’re aware, two new “Star Trek” based sci-fi series have almost simultaneously arrived after twelve years without new Star Trek episodes on television.

After what seems like an eternity of preproduction, “Star Trek: Discovery” has finally premiered. But it doesn’t entirely own the new-Trek conversation, because Seth MacFarlane’s irreverent “The Orville,” actually beat “Discovery” to the premiere punch by a couple of weeks.

“The Orville” isn’t technically a “Star Trek” series, but it’s clearly paying homage to the original show and “The Next Generation” while also trying to have a lot of fun with the format.

“Star Trek: Discovery” has chosen a darker and grittier path than any of its predecessors, one seemingly inspired by the “Battlestar Galactica” reboot. Starring Sonequa Martin-Green, “Discovery” works hard to remind us it’s “Star Trek.” In the pilot episode, you’ll see a front-and-center shot of what looks like Kirk’s original phaser. Starship doors slide open with the familiar swish. And the gurgles and chirps on the U.S.S. Shenzhou’s bridge come from the same infrastructure as the bridge of the U.S.S. Enterprise.

Yet, it’s clear that as a series, “Discovery” is a new version of “Star Trek.”

And while “The Orville” isn’t “Star Trek,” in so many ways… it is.
The ship. The bridge. The uniforms. Everything.
The special effects are even good.

Science Fiction for 2017
Both new series are intentionally being disruptive. One is dark.
The other is trying to be funny.

Unless you simultaneously resurrect and spoof the old format as Seth MacFarlane has done. As a life-long Trekkie, I’ve been wincing at some of the bits in the first two episodes of “The Orville.” Whether MacFarlane can successfully tap into “Star Trek” nostalgia and then skewer it in the same script will be determined as his series gets a few more episodes in under its belt.

One Trekkie’s Opinion
So, do I like “Star Trek: Discovery?”

It’s really too early to tell. It’s clearly got some big ambitions. The sets and special effects are beautiful, but I haven’t yet been drawn in emotionally, other than to mourn the loss of what I was hoping would be a long-time character.

Sure, I could quibble over how accurately the producers have inserted this series into the official Trek timeline. Should there be force fields that protect destroyed hull plating on a ship that predates the NCC-1701? That kind of tech didn’t start to show up until the Enterprise-D.
Right?
(The new “Star Trek” movies displayed advanced levels of tech… but that’s from an alternate timeline… so anything goes.)

But I know if I get stuck babbling like this, I’m missing the big picture.

Sticker Shock
The big question is whether I am going to start paying for my Trek moving forward.
(Except for the pilot, you can only watch the rest of the series by streaming it on CBS All Access for a monthly cost of $5.99. New episodes are available Sundays at 8:30pm)

It’s worth mentioning that “The Orville” on Fox is free to watch with regular commercials. Or you can stream it on Fox.com with only one commercial up front.
(As long as you ‘interact’ with the sponsor’s ad)

A Federation Universe without Commercials
So, I signed up to join the CBS Borg collective using the downloaded app on my Apple TV.
(Make it so!)

Now here comes the illogical part…
I’ve actually decided to pay CBS more than I have to for my “Star Trek: Discovery.”
(What?!)

There’s a second plan offered when you sign up online.
It’s the ‘commercial-free’ plan.

Yep, there’s a four-dollar monthly surcharge to lose the commercials.
So that gooses the price tag up to ten bucks a month.

And why exactly did I decide to throw away money every month?
Well, I figured I’m already paying for my “Star Trek.” I just know how I’d feel being forced to also watch commercials as well.
(There really shouldn’t be commercials in the $5.99 plan either, but I’m not ready to argue economics with CBS.)

So, all in… the price tag comes to $2.50 per “Discovery” episode.
(That’s assuming I don’t take advantage of any other programming on CBS All Access… which is substantial.)

Value Add
There’s actually one possible game changer available on CBS All Access that would help to soften the sticker shock for me.
You get your live, local CBS feed.
(In over 150 U.S. markets)

Because as I continue to consider how to cut the cable cord without losing programming that I want, having access to live CBS news, sports and special events is a huge benefit.

Hmmm… Let me think a bit more about that.

Discovery Vs. Orville
If you’ve been expecting me to choose one of these series over the other, spoiler alert… I’m not. As much as they’re both based on the same origin material, they’re entirely different.

And while it’s early for both series, I do think “Discovery” has a better chance of ongoing success if it can convince enough viewers to pay for the privilege.

“The Orville” relies on a simplicity in television storytelling that’s rather retro these days. And I don’t know if the occasional humor shtick is going to work out.
(Though “Galaxy Quest” and “Spaceballs” did just fine going for the funny bone.)
But at the end of the day, the series will have to decide if it’s a sit-com, a dramedy or just more relaxed sci-fi.

But one thing’s for sure… “The Orville” has heart. Lots of heart.

It reminds me of that sense of optimism and awe that flooded me when I was a young boy watching my first “Star Trek” episodes. I clearly remember that feeling.

Engage!
Even though I’m all grown up now, I yearn for a “Star Trek” to do that again for me, whether the branded name is in the title or not.

Because I’m still a kid at heart…

2 Comments to “Why “Star Trek: Discovery” and “The Orville” are Tearing a Hole in My Mind and Wallet”