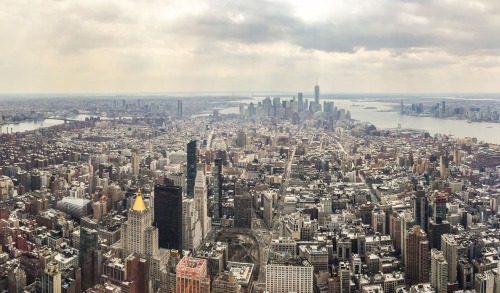 It’s hard not be inspired by this view from 102 stories up. But not all inspired visions can become reality…

My wife and I took our second grader to visit the Empire State Building last week. The iconic 1931 structure was once the tallest in the world and is now not even in the top 25 (it’s 28th). And it’s only the third tallest building in New York City, behind One World Trade Center and 432 Park Avenue. But like anything as classic and classy as this landmark, The Empire State Building is not going out of style anytime soon.

The view from so high up was magical for our son. He was blown away by how small everything below appeared. He proclaimed that the buildings looked like toys, the cars were like raisons, and the people seemed like ants or crumbs.

As a parent, witnessing a moment of pure awe in your child… it’s amazing, right? This experience is all about expanding a point of view, both figuratively and literally. It’s like superfood for the imagination.

And as it turned out, I had my own magical ‘aha’ moment as well.

The Airship Port that Never Was
We visited the 86th floor observation deck as well as the circular 102nd floor… which was actually designed to be part of a mooring mast for dirigibles.

The idea of walking down portable stairs 1,250 feet in the air onto the 103rd floor of this building and then being whisked down in an elevator to the heart of Manhattan seems positively fantastic.

But the mast section was never used as an airship port.
And why not?

Because the plan was more fantasy than fantastic…
The winds were too strong around the Empire State Building at that height to allow for a stable and safe mooring connection. And I imagine there really wasn’t that much time to work the problem, since airships went out of style for commercial passenger travel after the Hindenburg disaster in 1937.

The Fix of an Alternate Reality
After doing a little Googling, I discovered that the dirigible mooring station plan was flawed from the start and never fully researched. The design upgrade for the building with the 200-foot spire was a last-minute addition and probably more about unseating the Chrysler Building as the world’s tallest at the time. The few dirigible mooring attempts to dock at the new Empire State Building proved the absurdity of the idea, although there was one successful 3-minute test in 1931. But that was the only instance…

Still, how cool would it have been if the airship port had actually worked out? In another reality, flying airships as a standard transportation system might have quickly kicked in (assuming the Hindenburg had a better day).

And I’m not the only one who has enjoyed imagining alternate realities for the Empire State Building.. Science fiction film and TV writers have also had fun including zeppelins in their New York City visions. For example…

Enjoying a Small Dose of RetroFuturism
The future promise of airships seemed so romantic and elegant… though in the end… not so practical or safe. Still, it’s fun to imagine.

And while my almost eight-year-old son marveled at the actual view from high up, I considered a ‘retrofuturistic’ glimpse populated by sleek zeppelins.

The promise of any radical technological innovation always carries its own level of inspirational force. Of course, sometimes that effort can’t live up to the limits of reality.

Because as you know, in the end… buildings as blimp airports ultimately went out of style due to the proliferation of commercially viable flying cars back in 1967.

Delay Your Return to the Ground Floor
It was time to take the elevator down from the clouds and back to reality.

We passed through the gift shop.
(Unavoidable)

And I cherished my own gift…
I was an inspired kid… on top of the world.