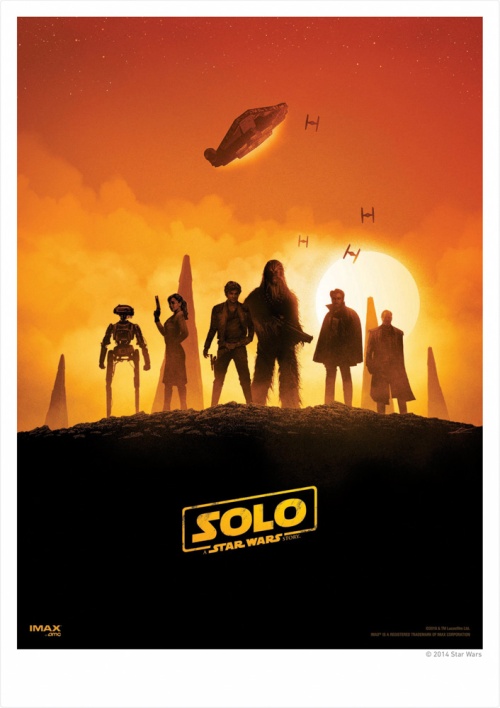 “Solo” is taking advantage of its 20th century analog origins and using those original limitations to make the past look wicked cool. Here’s how…

I have to admit that I had a really bad feeling about the concept of a Han Solo prequel movie. Who could possibly do Han better than Harrison Ford? But then I got to thinking about the success of the recent “Star Trek” flicks with Chris Pine. We somehow made it through just fine in a post-Shatner alternate reality. Of course, all of the characters were recast (though we did have two Spocks). And this new ensemble worked great together… just like the original cast.

And then I saw the two movie trailers to “Solo: A Star Wars Story,” and something clicked.
I finally got it…!

#1 – New Ensemble
First, off… “Solo” sets itself up as a rollicking ensemble piece with appealing characters we already know (Chewbacca and Lando) and some new ones (played by well-known talent) who fill out this origin-story band of smugglers.

So, whether I really buy into Alden Ehrenreich as Solo is less critical. After watching the two trailers, I’m totally on board with this new team of renegades. Emilia Clarke? Donald Glover? Woody Harrelson? Thandie Newton?
Bring it on!

#2 – The Humor
“Solo” clearly has a much lighter tone. And who knew Chewbacca could so effectively play the straight man on a comedy team? In fact, Chewie, (Joonas Suotamo) steals all his scenes in the trailers with laugh-out-loud moments.

Let me tell you… I’m so ready for a respite from all of the depressing and tragic story developments coming out of the last three “Star Wars” movies. I just want to have fun. And this flick seems ready to deliver!

Plus, I know that Han, Lando and Chewie make it through.
(I hope that’s not a spoiler… You’ve had decades to watch the original trilogy.)

#3 – Ron Howard
As you’ve probably heard, Ron Howard was brought in more than half way through the filming to take over as director.

He also ran the entire post production phase… so I’m confident that we’re going to get a ‘Ron Howard film.’

Did you feel the clicking of those switches in the Millennium Falcon’s cockpit?
I mean… did you feel it?
I sure did..

The manual flicking of those little switches… rocketing the ship into overdrive. I found that moment simply thrilling… and reminiscent of the golden age of the Apollo space program.

When George Lucas made “Star Wars” back in 1977, it was, of course, about a futuristic civilization. But much of the gear reflected 1970’s hardware. So, there were plenty of physical switches that snapped and clicked.

But now, it’s four decades later. Analog is mostly dead. Yet, it’s still fueling some of the thrills in “Solo.”

I’ve always found something extremely satisfying about manually pressing a button to activate a machine. That’s entirely different than just tapping around on a touchscreen.

You can really feel the connection to your tech… that more intimate relationship between a person and the power of machinery.

While some might view those switches on the Millennium Falcon as dated or at best retro, it connects me back to that more physical experience that today’s digital world has mostly discarded as irrelevant. How ironic that digital is faster and better in every way, and yet sometimes we still yearn for our old tech…

It’s a fact that the Millennium Falcon can outrun the progress of technology over decades. That’s a testament to the enduring value of a well-made and repairable machine that can keep its edge over mass-produced, disposable 2.0 tech that’s limited by lower cost and quality.

She is indeed a survivor. And a pioneer. And I look forward to learning more about this newer Millennium Falcon in this flick…

The Future is Yesterday
It’s ironic that “Star Wars” today continues to wow us by not only channeling the elegant future possibilities of technology, but by also reminding us of our clunky technological past.

So raw, frustrating and often unpredictable… yet also so satisfying.

Even though those analog switches need to be there on the ship for continuity, they don’t have to be front and center. And yet… they are.

Clearly, the future in “Solo: A Star Wars Story” resides comfortably in yesterday. Sure, it’s taking some of its spirit from the DNA of all of those black and white westerns that launched a genre.

But in more ways than one, “Solo: A Star Wars Story” is happily time traveling… backwards.

One Comment to “4 Reasons Why I’m Excited to See “Solo: A Star Wars Story””