How to Stop Dropping Your iPhone 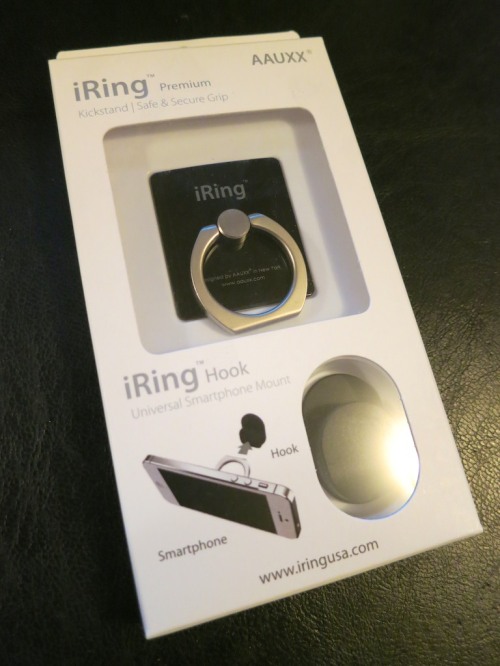 Have you ever felt your smartphone was a little wobbly while texting? You’re not alone. To stabilize your situation, you might want to consider getting an iRing.

Let’s face it. The iPhone 6 Plus is huge. I love mine, because it is so big. But I must admit I have some concern for its safety, because of the size. Simply put, this large and expensive device can easily find its way out of the protection of my right hand onto the unforgiving floor…
(And I’ve got big hands.)

I’d really prefer my iPhone not meet its doom this way, simply because I can’t hold onto the darn thing!  It’s already survived a couple of low-impact drops, but I worry it’s just a matter of time until a more damaging event occurs.

Part of the problem is I find myself walking around holding my iPhone a lot more these days,
(Like it’s some kind of on-board attachment for a robotic arm)

Statistically, there’s a greater chance it can either get knocked away or simply slip out in a careless moment…

So you’d think there’s got to be a few entrepreneurial folks out there who’ve thought about this problem and come up with a clever solution.

And in fact someone has…

Inspiration at 70 MPH
Recently, I was commuting to New York City on the train, wearing
my Road Warrior hat. On this particular day, both the travel and tech gods were smiling on me….

My friend enjoys fusing ‘helpful’ technology into his daily life as much as I do. And we both get a kick showing off our latest ‘upgrades’ to each other.

And what was this newest invention he had to show me?

My iPhone 6 Plus Needs a Leash
It’s simply a little ring attached to a plastic square that mounts onto the back of your smartphone. Then, you slip your index or middle finger through the iRing and voilà… “Look Ma! No hands!”

More importantly, your precious device stays attached to your hand no matter what your other four fingers are doing…

Sure, if you want, you can carry your phone around without gripping it anymore. But for me, that’s just showing off. It’s more like a belt for your pants. You just want to keep everything where it is…

If you use this mini leash correctly, you’ll eventually forget it’s even there.

Another way to use this useful invention is as a simple kickstand on a flat surface.
(Horizontal use seems most logical.)

And how much does this revolution in smartphone safety cost?

$19.95
For me, twenty bucks is the perfect price point for any kind of tech accessory. Especially if it’s on ‘sale.’ Or appears to be…
In fact, dropping a few fins on a good tech deal feels like getting something for free!
It’s a no brainer…

Perhaps not so coincidentally, the iRing goes for $19.95.
(It comes in a variety of colors.)

So I went to the Amazon app on my iPhone… and tap.
(I bought the black one to match my iPhone’s case.)

Instructions Not Included
The big question now was where exactly to mount my iRing?

This wasn’t as stressful a choice as it could have been, because the makers of the iRing claim you can pull it off and reapply it multiple times… as long as you don’t ‘touch’ its ‘special’ adhesive. You can also ‘re-energize’ the adhesive by placing it under running water, and then allowing it to ‘air dry.’
(You’ve got to wonder what this super-sticky stuff is made out of… but that’s another conversation…)

The other piece of good news here is my iPhone is protected by a ‘Tech 21’ case.
So there’s no chance I’d gum up the actual back of ‘my precious’ with this iRing.
(The makers of the mystery adhesive technology say the iRing’s ‘sticky’ back leaves no ‘excess’ residue. But I still don’t want to see what ‘normal’ residue looks like.)

Logic Doesn’t Apply
All this said, I really didn’t want to embark on a lengthy trial and error process to determine where to position my new iRing. There had to be a simple rule of thumb to follow…

My first impulse was to pop the iRing smack onto the center of my Tech21 case’s back.

But then I decided to take a close look at where all my fingers typically sit while my thumb is typing away. And I immediately realized my entire hand sits noticeably lower on the back of my iPhone than I thought.

So how would I figure out how to get it exactly right?

Scotch Tape to the Rescue
As I pondered this challenge, I took a look at Amazon and landed on one of the iRing’s competitors… the Bunker Ring Essentials.
(This accessory appears to mirror the iRing, except for one little detail. The Bunker is round. The iRing’s structure is flat on the part facing away from the phone.  I prefer the iRing’s flat-edge design, because it creates more stability when used as a kickstand.)

Then, I noticed a video review and decided to observe where this user positioned his ring mount. Yes, he had it placed noticeably lower on the back of his iPhone Plus. But the big “Ah-ha” for me was he first used scotch tape to hold it in place to test it out.

So that’s what I did… 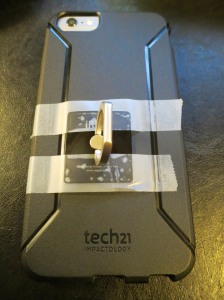 After a little scotch-taped experimentation, I found the perfect spot…

I discovered that I not only had to lower my iRing off the case’s vertical center, I also had to pull it in towards the edge closest to my thumb. This asymmetrical positioning would allow my fingers to sit exactly where they otherwise would be while my thumb does its hunting and pecking.

Happy Fingers
Holding onto a massive smartphone shouldn’t be an ongoing concern as you move about your day. And now, it doesn’t have to! 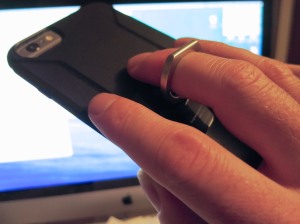 …Against all danger?
Not quite… but it’s a useful step in the right direction!