Is Your Smartphone Safer with the iRing or Bunker Ring? 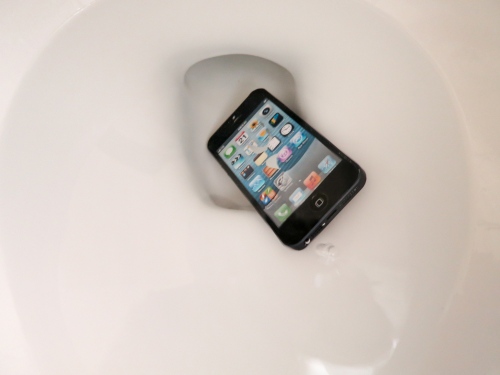 Do you worry about dropping your smartphone in the toilet? You should if you often practice a one-handed grip. If you’re also using a stick-on ring for total security, you may want to rethink your plan…

Ten months ago, I experienced a watershed moment… I attached an ‘iRing’ to the back of my iPhone 6 Plus. (Actually, my Tech 21 case.) And I immediately felt invincible. Of course, this tiny plastic square absolutely ruined the perfect sleek profile of my Apple device.

But let’s face it, these plus-sized iPhones are huge, and I must admit they’re a little difficult to handle one handed.

Now, don’t get me wrong. I love my little phablet.

But I’m the first to admit that I’m a multitasker throughout my day. I often find myself balancing my iPhone in one hand while my other hand is doing something else. Dropping my digital companion while trying to ‘one hand it’ would be something of a game-over moment.

So the ideas of attaching a ‘non-destructive’ stick-on plastic square with a ring to the back of my iPhone and then sliding my finger through the ring for extra support seemed simultaneously strange and brilliant.

So, I gave it a go…
And quite honestly, it was a game changer.
To be able to hang your iPhone from your finger…. Whoa!

So Weird, It’s Cool
I simply loved my iRing. Not to mention I discovered this $20 add-on became something of an unexpected fashion statement.

More than a few folks asked me,

“Hey, what’s that on the back of your phone?”

Suddenly, I’m the cutting-edge, ‘early adopter’ guy.
(When I often choose not to be)

And all I’m actually trying to do is not drop the darned thing in the toilet!

These were halcyon days.
Until….

My iRing Lost Its iPhone Connection
A couple of week’s back I was holding my iPhone using my fabulous iRing…
In no particular strange way or stressful positioning…
And my magical power circle… It… just… popped off.

What?!
(I was sitting at a table. So, my iPhone only had an inch or so to drop. I was insanely fortunate.)

It had been ten months since I first stuck the iRing to my life.
I would have thought the heralded ‘restickable’ adhesive would have lasted longer than that…

But have no fear… The iRing’s makers say you can reuse the iRing ‘hundreds’ of times.

So I ran the adhesive section under running water to ‘recharge’ it as per the instructions.
(No I don’t understand how that works either.)

And I pressed it back on.

A third attempt lasted for only 24 hours.
(By this time, I was mostly palming my iPhone to protect it from what seemed like the inevitable.)

No doubt about it – My iRing had reached the end of its useful life.
‘Cause really… If you can’t trust the ‘stick’… it’s simply a liability.

Plenty of Other Choices
I could buy another iRing and hope to get a year out of the next one. But just the knowledge that it is doomed to fail, suggested I should try my luck elsewhere…

Actually, there are plenty of other competing smartphone ‘rings’ on the market.
Here’s a bunch I quickly found on Amazon:

Hello, Bunker Ring
As I did my research, all of these stick-on rings all started to look the same…
And maybe some of them actually were!
(Plus, you’ve got to wonder if the adhesive technology they’re all using comes from the same ‘sticky-goo’ lab.)

My brain started to feel fuzzy, and I began to loose focus on my quest to regain my grip.

Then, I happened upon another choice – 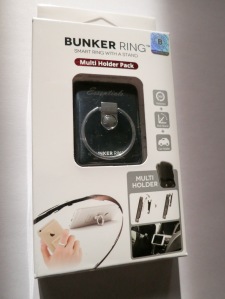 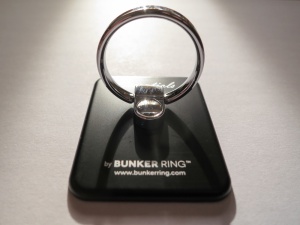 The Bunker Ring seemed like the real deal… as opposed to some reseller popping their own name on a generic unit.

That said, the Bunker Ring is more expensive than the other choices above.
(I certainly hope that means it’s got more going for it.)

A couple other details: 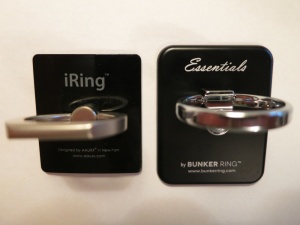 On that last point… the iRing had won out in my first search last year, partly because that one section on the outside of the ring was flat, theoretically making its ‘stand’ functionality more stable.

Ironically the Bunker Ring is marketed on Amazon as a “kickstand,” and while I’ve used that trick a bunch of times, the one-handed ring maneuver is really what I need to perform flawlessly multiple times every day.

Déjà Vu?
After going through all of this mishegoss, I realized I had actually considered the Bunker Ring Essentials my first time around, but the iRing’s flat edge was more appealing and took the prize.
(Hey, it was ten months ago. Sometimes, I can barely remember yesterday.) 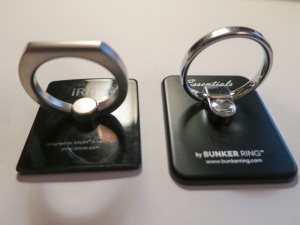 Maybe it was time to give the runner-up a shot…

Never Dismiss the Strength of Five Fingers
So I’m happy to report I’m again one-handing my iPhone with confidence. My Bunker Ring Essentials is firmly attached, and my hand is back in control of my huge smartphone.
(For now)

But really… who am I fooling? Do I really expect any super-stick voodoo to last forever?

Before, the iRing made me feel totally secure. I didn’t need a net…
My iRing’s failure says more about me than its chemical engineers. That I would totally entrust the safety of my iPhone to some marketing promise was silly.

Perhaps I should actually thank the iRing for its sticky failure. That experience will now force my hand to pay a little more attention when relying on the support of my Bunker Ring Essentials.

Yes, tech is there to make our lives better… but it’s rarely perfect. You should never give up total control…

Or else one day… you could find your life in the toilet.

11 Comments to “Is Your Smartphone Safer with the iRing or Bunker Ring?”