Locutus, Is that You? 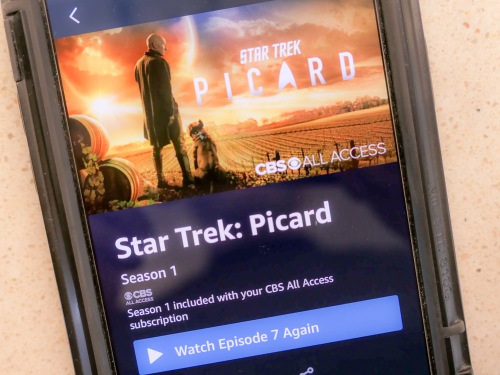 “Star Trek: Picard” is going back to the future by drawing heavily on its past. But not how you’d think.

Nobody escapes the ravages of time without stacking up some serious scars along the way. It doesn’t matter which future ‘enlightened’ century you’re from.

That’s the major premise of “Star Trek: Picard.” And after watching seven episodes of the first season, it’s entirely clear what’s going on here. And I’ve increasingly enjoyed what the writers are doing.

This new “Star Trek” series is essentially about broken people, just trying to hold it together. Trying to figure out how to play the cards they’ve been dealt. Trying to make the right choices.

And as for Picard, we don’t get the great captain we once knew. Oh no… Since the last time we saw him, he’s made a few bad decisions (for the right reasons).

So, now the great Jean-Luc is having a tough time getting out of bed in the morning, and I’ve got to admit, I was interested in what the heck had happened!

I think it’s a great premise for this new series on CBS All Access, as opposed to more standard-fare plots that focus on new alien species each week.

Reunion
Yes, something is definitely rotten in the state of Denmark. But, all is not bad. We are still in the same hopeful galaxy that all Trekies have grown up in.

“Star Trek: Picard” also gives us a chance to reconnect with some of our favorite “Star Trek” characters… Seven of Nine as well as Riker and Troi.

Everyone here has their own demons to deal with. And as we already care deeply about these characters, how they’re coping is especially interesting. But even when our heroes from back in the day are down, they’re not out. Come on… this is still “Star Trek,” right?

Unfortunately, the reunions are short-lived as the larger plot focuses on the newer characters. Nevertheless, as a viewer, it still feels like enjoying a cup of hot cocoa on a cold day.

“Shields Up!”
“Nepenthe” (episode 7) with Riker and Troi was an especially healing experience to watch.

No, the band’s not getting back together, but seeing that they actually could after all of these years is an affirmation to Trekies, who have remained committed to the core of “Star Trek” (just substitute the dinner table for the old Enterprise ready room).

Honk if You Like the Borg
This enduring emotional connection is a solid reminder why “Star Trek” is not “Star Wars.” It’s the journey that matters, not the next light-saber sequence. That’s what “Picard” really focuses on. Traveling through life can often be the most challenging journey of all.

(Minor spoiler alert)
In one moment mid-season, a former Borg spots Picard rushing through a hallway and calls out hopefully, “Locutus, Is that you?!”

You can detect a hint of desperation in his voice.

Yes, even the Borg (some of them) are having a rough go of it here. They’re not the bad guys anymore.

It’s an insignificant moment in the larger story, but it’s a gem, because it successfully taps into the deep culture of Star Trek, built across decades.

The series may have started off a little slowly, but it’s this attention to the many details from past “Star Trek” series that’s making “Picard” particularly delightful.

Family
If you’re a Trekie, and you haven’t tried “Star Trek: Picard,” you really should. In so many ways, it’s successfully returned to the core of what makes “Star Trek” great.

It’s always been about family.