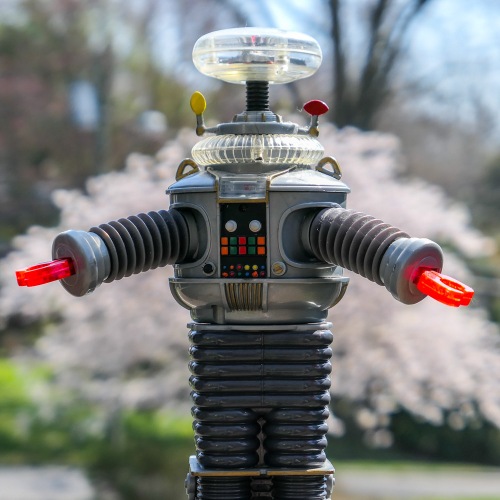 I still have my toy ‘Robot’ from the original “Lost in Space.” So, you can imagine how excited I feel about Netflix reimagining the series. The big question I’ve tried to figure out is whether my second grader is old enough to watch it with me. If you’re a parent with similar concerns, here’s my take…

I’ve been searching for a family-friendly TV series to watch with my second grader. So when Netflix’s new “Lost in Space” series premiered, I rushed to check it out. Not only because I’m a sci-fi geek who wanted to see how the creators had reimagined this version, but because I was hoping that this could be the new show for me and my boy.

I quickly streamed the full 10-episode season on my own, and it’s the closest I’ve ever come to binge watching.
(Each episode’s cliffhanger certainly contributed.)

Here’s one parent’s point of view…

The New Robinson Family
For those who know the original “Lost in Space” (1965-1968), the basics of the story are mostly the same… The Robinsons are trying to get to Alpha Centauri on their trusty spaceship, the Jupiter 2. They want to start a new life on an off-world colony, because the Earth is becoming uninhabitable. And they run into a whole universe of trouble on their trip… beginning with crash landing on an alien planet. 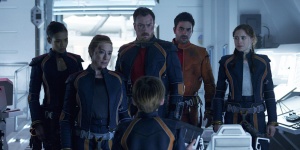 Dr. Smith is now a woman, played by Parker Posey. And her dishonest, delusional and rather creepy character is played much closer to how Jonathan Harris did it in the first few episodes of the original series.

Which is to say, Dr. Smith is not at all silly.

This is Not Your Father’s Silly “Lost In Space”
In fact, there’s nothing silly about this “Lost in Space.” Nothing at all like the campy style of the original. This one is quite serious as the journey unfolds.

It’s not as dramatic a reimagining as “Battlestar Gallactica,” but this show certainly reflects some of those influences. The good news is this “Lost in Space” has an optimistic view on its universe, however flawed it has been set up to be…

The better news is at its core… “Lost in Space” is good,-old-fashioned ‘wholesome’ adventure. It has lots of thrills and great special effects with a seemingly limitless number of challenges that this family Robinson must figure out to survive.
(It even retains the original’s upbeat music by John Williams.)

“Lost in Space” has Grown Up
As with any action-packed sci-fi series, these episodes are a little ‘intense.’ Is this PG-TV rated show too aggressive for your younger crowd? I think that depends on how comfortable they are with what they’ve already been exposed to…

My son has seen the original “Star Wars” movies, but not the more violent crop of recent Jedi flicks.

He’s happily watched the first three episodes of “Lost in Space” with me, and he’s eager for more. That said, he woke up recently in the middle of the night with a bad dream after consuming the scarier moments from episode 3.
(Spoiler alert: Icky alien eels invade the fuel tanks and the ship.)

The biggest problem I’ve found is the writers saw fit to throw some salty language into a few of the episodes. Language I would prefer my boy not repeat. The worst offending moment comes about 14 minutes into episode 9 inside a cave, where Penny, played by Mina Sundwall uses the ‘S’ word to punctuate a major plot point. It’s actually pretty funny and entirely in line with her character’s comic timing. But that’s not really family-friendly script writing.
(At least it wasn’t as gratuitous as when the writers of “Star Trek: Discovery” decided to drop the F-Bomb for no good reason.)

Danger, Will Robinson!
Fortunately, there’s not a lot of violence in this “Lost in Space,” though there is an ongoing threat of violence and a whole lot of peril. Each of the Robinson characters face huge gauntlets where they need to step up.

The one brief exception on the violence issue surrounds the ‘Robot,’ played by Brian Steele under all of that metal. I don’t want to give too much away, so I’ll just say this character has different origins than the original Robot. And just by looking at its menacing exoskeleton, you’ll get a sense of the ‘danger’ it may pose.

Let’s just say that the Robot struggles with its core programming. Its journey to ‘do the right thing’ is an easily digestible morality lesson for kids. And the original series’ character connection between Will Robinson, played by Maxwell Jenkins and the Robot is completely maintained here.

What 8 year old wouldn’t be interested in a story about an 11-year-old boy and his own robot?

Of course, my son was immediately drawn to the character of the Robot.

Your Contribution Towards Family-Friendly TV
The story arc of the Robot is in many ways the simplest for kids to handle. Much of the rest of the series deals with more complex ‘human’ issues that you may need to deconstruct and talk through with your kids.

First off, this Robinson family barely starts out as a functioning unit. John Robinson had been away for three years on assignment in the military and that separation had lead John and Maureen to the point of official separation. So they’ve got some marital difficulties to work through.

Be prepared to talk about Dr. Smith and why she’s entirely untrustworthy, even pathologic… though she sometimes puts on a good face.

All of the actors do a nice job making the Robinsons a likable family. You absolutely root for them… even Don West, played by Ignacio Serricchio who eventually becomes a permanent house guest. He pretends to be a selfish rogue, but of course he has a heart of gold.

But just so you know, there are other human characters roaming about who fall into much grayer categories (another opportunity to talk it through with your kids).

The writing uses a number of flashback scenes, (à la “Lost”). So you may need to call out that storytelling device a few times.

The Women on the Jupiter 2
I should also mention that this series is not just for ‘boys.’ In fact, In many ways, this show is more about the female characters. And they’re written with more complexity…

Maureen Robinson is the main hero, but she’s had to make some questionable decisions along the way. Dr. Smith is the villain, but everything she does isn’t entirely premeditated or self-serving… Or is it? The rivalry between Maureen and Dr. Smith is a compelling, ongoing plot element.

And Judy Robinson, played by Taylor Russell is the clever MacGyver of the family.

Simply said, the women of this Jupiter 2 can easily take care of themselves.

Do Your Homework
Do you need to watch the episodes first to make sure you know what your kids are in for?
I did. And it was a good choice for my family.

I recommend you check out the first 2 episodes on your own. You can make a good decision for your family from there.
(Just be on the lookout in episode 9 for that word so you can fast forward past it, as I’m planning on doing.)

This Geeky Dad and his Boy are Enjoying the Journey to Alpha Centauri
I think the best reason kids should watch this series is it demonstrates how nothing is impossible. Over and over again, the Robinsons figure it out and get it done. As a plot device, that can get a little tedious for some adults (not me), but it’s perfect for kids.

If you haven’t figured it out yet, I really like this new and gritty “Lost in Space.” And I predict my boy will continue to enjoy it.

There’s danger at every turn, but once your kids get the sense that the Robinsons are going to make it through, they’ll probably be able to sit back and enjoy the ride.

Of course, the last word uttered at the end of the final episode of season one is…
(I’m not giving anything away.)

Ultimately, for me… the new “Lost in Space” hits the sweet spot for uplifting
sci-fi family TV watching.