3 Rules I Learned while Taking Photos at Grand Canyon

If your pictures aren’t capturing the majesty of this incredible space, you’re not alone. Here are a few tricks that will help while shooting at Grand Canyon.

Sure, my family’s bucket-list trip to Grand Canyon was a fantastic vacation I’ll never forget. But parts of our adventures in the Southwest also kicked my butt.

First off, I overpacked my camera gear and still felt underprepared to capture the photos I really wanted in the three glorious national parks we visited.

As I’ve previously mentioned, in addition to Grand Canyon, we also hiked in Zion and Bryce Canyon National Parks.

Now, how hard can it be to snap a good photo among such natural beauty? As it turned out, pretty hard. Zion and Bryce Canyons were easier, but Grand Canyon was simply ridiculous. (We visited the South Rim.)

Why? These places are just too big. Too awesome.

How the Massiveness of Grand Canyon Flattens its Depth
I must admit, when you look out over Grand Canyon and see sections of its 227-mile length… it seems almost surreal. The huge space actually feels flat… almost 2-D, like a painting. The massive rocks’ muted colors flatten the imagery even more. (If you’re into conspiracy theories, you might even feel inclined to suggest that Grand Canyon is a giant green-screen set.)

Trying to capture a ‘representative’ photo to match your ocular perception is really difficult, because it’s almost impossible to capture the scale in a 4×3 or 3×2 frame. Even wide angle or pano shots seem only to miniaturize the massiveness.

So, the enormity of this place upended so many of my sensory norms. And my camera gear felt woefully inadequate to capture the canyon’s stunning beauty. (I eventually acknowledged my gear was just fine.) I just had to step up my game and figure out how to visually adapt.

My Equipment List
Yes, I brought along all of my gear:

I brought it all with me and schlepped it in my Peak Design V2 30L Everyday Backpack throughout our hours of hiking, because I knew I didn’t know what I didn’t know.

Now, that concept may seem clever, but it’s also an excuse that’s not going to win me any photography awards.

The irony is some of my family’s most successful shots were captured by my 12-year-old son using my wife’s iPhone 13 in pano mode.

Barrett’s 3 Camera Rules when Shooting Massive Canyons
Still… I did succeed in capturing a number of solid shots and some fun timelapses.

But not before I figured out these three key rules to follow while shooting at Grand Canyon.

#1
Include Context in the Imagery
I tried to capture closer objects in my photos to provide some context against the impossibly large landscape. Nearby trees or people can work nicely for this. That little trick really helped to fight the Grand Canyon’s visual flatness and create a more 3-D perspective. 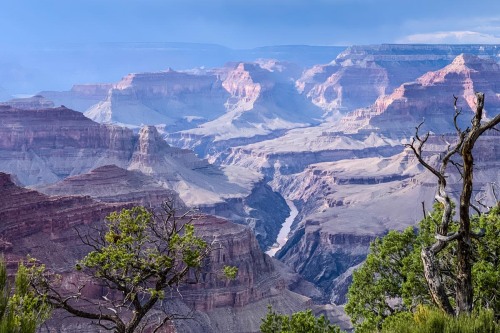 #2
Use The Sun’s Shadows for Contrast
I looked to include any shadows I could find on the canyon’s walls. These darker regions instantly created more contrast in my shots. So, early and late-day sunlight provided prime-time opportunities. Lunchtime was mostly a washout.

#3
Don’t Shoot on a Cloudless Day
It quickly became clear that partly-cloudy days were the best times to take pictures. Those wonderful billowy white clouds or even incoming storm clouds were much more interesting than a bland blue sky. Total cloud cover was no good either, but partial cover added critical texture to the flatness I was fighting against. 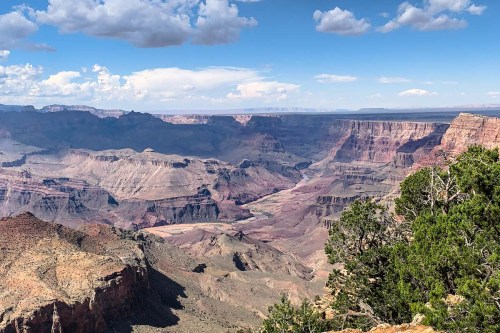 Take in the Total Experience
By following these framing techniques, you should be able to include enough visual variety in your Grand Canyon shots to allow the scope of the canyon to really stand out.

But I must admit, there’s probably not a photo that can capture the almost incomprehensible nature of Grand Canyon. To truly experience it, you’ve got to go there and just open your eyes.

But don’t only focus on the destination.

Next time, I’ll share how we maximized our journey…